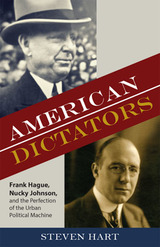 One man was tongue-tied and awkward around women, in many ways a mama's boy at heart, although his reputation for thuggery was well earned. The other was a playboy, full of easy charm and ready jokes, his appetite for high living a matter of public record. One man tolerated gangsters and bootleggers as long as they paid their dues to his organization. The other was effectively a gangster himself, so crooked that he hosted a national gathering of America's most ruthless killers. One man never drank alcohol. The other, from all evidence, seldom drank anything else.

American Dictators is the dual biography of two of America’s greatest political bosses: Frank Hagueand Enoch “Nucky” Johnson. Packed with compelling information and written in an informal, sometimes humorous style, the book shows Hague and Johnson at the peak of their power and the strength of their political machines during the years of Prohibition and the Great Depression. Steven Hart compares how both men used their influence to benefit and punish the local citizenry, amass huge personal fortunes, and sometimes collaborate to trounce their enemies.

Similar in their ruthlessness, both men were very different in appearance and temperament. Hague, the mayor of Jersey City, intimidated presidents and wielded unchallenged power for three decades. He never drank and was happily married to his wife for decades. He also allowed gangsters to run bootlegging and illegal gambling operations as long as they paid protection money. Johnson, the political boss of Atlantic City, and the inspiration for the hit HBO series Boardwalk Empire, presided over corruption as well, but for a shorter period of time. He was notorious for his decadent lifestyle. Essentially a gangster himself, Johnson hosted the infamous Atlantic City conference that fostered the growth of organized crime.

Both Hague and Johnson shrewdly integrated otherwise disenfranchised groups into their machines and gave them a stake in political power. Yet each failed to adapt to changing demographics and circumstances. In American Dictators, Hart paints a balanced portrait of their accomplishments and their failures.

STEVEN HARTis a journalist and freelance writer whose work has appeared in the New York Times, the Philadelphia Inquirer, and Salon. He is the author of The Last Three Miles: Politics, Murder, and the Construction of America’s First Superhighway and two novels. He has been a featured guest on National Public Radio’s On the Media and on WNYC’s The Brian Lehrer Show and The Leonard Lopate Show.

REVIEWS
"A smartly written chronicle studded with serio-comic vignettes, a narrative of greed and violence, and the thorough research of an author who clearly relishes his subject."
— Star-Ledger

"Hart’s tale of the rise and fall of these legendary bosses is shot through with crisp insights that can only come from decades covering the murky political swamps of Jersey."
— Seamus McGraw, author of The End of Country

TABLE OF CONTENTS
Title Page
Copyright Page
Contents
Acknowledgements
Introduction: The One Who Got Away, and T he One Who Didn't
1: In the Court of the Emerald King
2: Lines of Power
3: Boom Times
4: Hard Times
5: Public Works
6: A Choice of Enemies
7: Decline and Fall
Epilogue: The Machines That Didn't Stop
Notes
Bibliography
Index