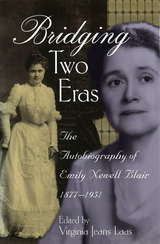 First written in 1937 and never before published, Bridging Two Eras is the fascinating autobiography of Emily Newell Blair, a remarkable woman who successfully reconciled a productive public life with the traditional values of a housewife and mother.

Because Blair's life essentially spanned two eras, from the end of the nineteenth century through the middle of the twentieth, she thought of herself as a bridge builder. A dedicated feminist, she wanted her autobiography to help women understand what life was like during that transition time. She had moved from being a conventional, middle-class, midwestern wife and mother to becoming an acclaimed author, a nationally known feminist, and vice chairman of the Democratic National Committee only two years after women gained the right to vote. She felt that her story could encourage women to take their rightful places in public life.

Bridging Two Eras is divided into two parts. Book I is a charming evocation of life in southwest Missouri in the closing decades of the nineteenth century. It offers great insight into family relationships, class structure, and social attitudes typical of much of small-town America. Book II addresses Blair's public career and follows her progress as professional writer, suffrage activist, and partisan politician. Included are acute judgments of leading political figures, fascinating vignettes of the suffrage movement, an insider's view of the workings of the national Democratic Party in the 1920s and 1930s, and a valuable outlook on Missouri politics during the first third of the twentieth century.

Perceptive and introspective, Blair captivates her readers as she traces her own evolution. With candor, she explains her conflicts between family and career, acknowledging the difficulties and tensions she faced in pursuing a public life. Delightfully written, Bridging Two Eras provides valuable insight into all the possibilities, as well as the limitations, life then held for an American woman.

AUTHOR BIOGRAPHY
About the Editor

Virginia Jeans Laas is Associate Professor of History at Missouri Southern State College in Joplin. She is the author or editor of several books, most recently Love and Power in the Nineteenth Century: The Marriage of Violet Blair.