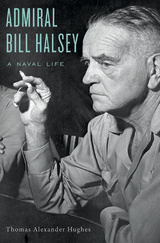 William Halsey was the most famous naval officer of World War II. His fearlessness in carrier raids against Japan, his steely resolve at Guadalcanal, and his impulsive blunder at the Battle of Leyte Gulf made him the “Patton of the Pacific” and solidified his reputation as a decisive, aggressive fighter prone to impetuous errors of judgment in the heat of battle. In this definitive biography, Thomas Hughes punctures the popular caricature of the “fighting admiral” to reveal the truth of Halsey’s personal and professional life as it was lived in times of war and peace.

Halsey, the son of a Navy officer whose alcoholism scuttled a promising career, committed himself wholeheartedly to naval life at an early age. An audacious and inspiring commander to his men, he met the operational challenges of the battle at sea against Japan with dramatically effective carrier strikes early in the war. Yet his greatest contribution to the Allied victory was as commander of the combined sea, air, and land forces in the South Pacific during the long slog up the Solomon Islands chain, one of the war’s most daunting battlegrounds. Halsey turned a bruising slugfest with the Japanese navy into a rout. Skillfully mediating the constant strategy disputes between the Army and the Navy—as well as the clashes of ego between General Douglas MacArthur and Admiral Chester Nimitz—Halsey was the linchpin of America’s Pacific war effort when its outcome was far from certain.


In this remarkable work, Tom Hughes masterfully portrays the maturation of the U.S. Navy through the life and times of Admiral Bill Halsey, from the sailing of the Great White Fleet to the Japanese surrender aboard his flagship, the USS Missouri. A must-read for anyone interested in World War II naval strategy and the colossal challenges encountered in conducting joint maritime warfare in the Pacific as experienced by one of the most audacious and controversial commanders in naval history.
-- Phil Haun, Yale University


Hughes’s biography of Halsey replaces the generalities about ‘the greatest generation’ with a hard-hitting, thoroughly researched, and very persuasive account of Halsey’s command in the Pacific War at a time when the success or failure of the whole effort against Japan hung in the balance. His is an essential and very readable revisionist portrait of one of America’s most famous naval leaders.
-- Ronald H. Spector, author of Eagle Against the Sun: The American War with Japan


A superb biography of a famed but elusive subject whose accomplishments and failings, virtues and flaws, have never been so persuasively captured. This compelling portrait of Halsey will stand for a generation or more as the preeminent life story of one of America’s greatest seamen.
-- Richard B. Frank, author of Guadalcanal: The Definitive Account of the Landmark Battle


Smartly written…[It] deserves to supplant E. B. Potter’s 21-year-old Bull Halsey as the standard life of its subject…Hughes is an entertaining writer and an incisive observer.
-- James D. Hornfischer Wall Street Journal


This new biography presents a fascinating reappraisal of one of the most important, yet subsequently neglected, military commanders of World War II.
-- Robert Guttman HistoryNet


Hughes uses this expertly researched and well-written biography to look underneath the layers of popular culture and try to understand the man behind some of the US Navy's biggest WW II successes as well as its biggest controversies.
-- J. C. Rentfrow Choice