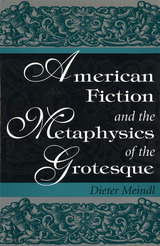 By synthesizing Kayser's and Bakhtin's views of the grotesque and Heidegger's philosophy of Being, American Fiction and the Metaphysics of the Grotesque seeks to demonstrate that American fiction from Poe to Pynchon has tried to convey the existential dimension: the pre-individual totality or flow of life, which defines itself against the mind and its linguistic capacity. Dieter Meindl shows how the grotesque, through its self-contradictory nature, has been instrumental in expressing this reality-conception, an antirationalist stance in basic agreement with existential thought. The historical validity of this new metaphysics, which grants precedence to Being--the context of cognition--over the cognizant subject, must be upheld in the face of deconstructive animadversions upon any metaphysics of presence. The notion of decentering the subject, Meindl argues, did not originate with deconstruction.

The existential grotesque confirms the protomodernist character of classic American fiction. Meindl traces its course through a number of well-known texts by Melville, James, Gilman, Anderson, Faulkner, and O'Connor, among others. To convey life conceived as motion, these writers had to capture--that is, immobilize--it in their art: an essentially distortive and, therefore, grotesque device. Melville's "Bartleby," dealing with a mort vivant, is the seminal text in this mode of indirectness. As opposed to the existential grotesque, which grants access to a preverbal realm, the linguistic grotesque of postmodern fiction works on the assumption that all reality is referable to language in a textual universe.

American Fiction and the Metaphysics of the Grotesque will significantly alter our understanding of certain traditions in American literature.

Dieter Meindl is Professor of English at the University of Erlangen-Nürnberg in Germany. He is the author or editor of several books, including a monograph on Faulkner's genealogical novels and a study of the American novel between naturalism and postmodernism.