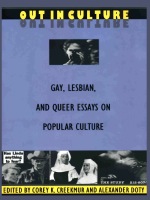 Out in Culture charts some of the ways in which lesbians, gays, and queers have understood and negotiated the pleasures and affirmations, as well as the disappointments, of mass culture. The essays collected here, combining critical and theoretical works from a cross-section of academics, journalists, and artists, demonstrate a rich variety of gay and lesbian approaches to film, television, popular music, and fashion. This wide-ranging anthology is the first to juxtapose pioneering work in gay and lesbian media criticism with recent essays in contemporary queer cultural studies.
Uniquely accessible, Out in Culture presents such popular writers as B. Ruby Rich, Essex Hemphill, and Michael Musto as well as influential critics such as Richard Dyer, Chris Straayer, and Julia Lesage, on topics ranging from the queer careers of Agnes Moorehead and Pee Wee Herman to the cultural politics of gay drag, lesbian style, the visualization of AIDS, and the black snap! queen experience. Of particular interest are two "dossiers," the first linking essays on the queer content of Alfred Hitchcock’s films, and the second on the production and reception of popular music within gay and lesbian communities. The volume concludes with an extensive bibliography—the most comprehensive currently available—of sources in gay, lesbian, and queer media criticism.
Out in Culture explores the distinctive and original ways in which gays, lesbians, and queers have experienced, appropriated, and resisted the images and artifacts of popular culture. This eclectic anthology will be of interest to a broad audience of general readers and scholars interested in gay and lesbian issues; students of film, media, gender, and cultural studies; and those interested in the emerging field of queer theory.

REVIEWS
"Out in Culture is out at last! Professors: cast aside your tattered old photocopies of the classic queer pop essays. General readers: fasten your seat belts; its going to be a bumpy night. In the spirit of Bette Davis (with sidekicks like Agnes Morehead and Pee Wee Herman), Creekmur and Doty take us on a wild ride through the pioneering work of 70s gay and lesbian criticism to the most recent essays in queer cultural studies."—Constance Penley, University of California, Santa Barbara

The Ambiguities of "Lesbian" Viewing Pleasure: The (Dis)articulations of Black Widow / Valerie Traub 115

Acting Like a Man: Masculine Performance in My Darling Clementine / Corey K. Creekmur 167

"Crisscross": Paranoia and Projection in Strangers on a Train / Sabrina Barton 216

In Defense of Disco / Richard Dyer 407

Children of Paradise: A Brief History of Queens / Mark Thompson 447

The Politics of Drag / Jeffrey Hilbert 463

All Dressed Up But No Place to Go? Style Wars and the New Lesbianism / Arlene Stein 476