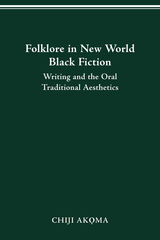 For a while, tracing African roots in the artistic creations of blacks in the New World tended to generate much attention as if to suggest that the New World does not have profound impact on their creative spirit. In addition, few studies have tried to construct an interpretive model through which an array of works by New World writers could be meaningfully explored on the basis of their African Diasporic identity.

In Folklore in New World Black Fiction, Chiji Akọma offers an interpretive model for the reading of the African New World novel focusing on folklore, not as an ingredient, but as the basis for the narratives. The works examined do not contain folklore materials; they are folklore, constituted by the intersections of African oral narrative aesthetics, New World sensibility, and the written tradition. Specifically Akọma looks at four African Caribbean and African American novelists, Roy A.K. Heath, Wilson Harris, Toni Morrison, and Jean Toomer.

The book seeks to expand the understanding of the forms of folklore as it pertains to black texts. For one, it broadens the dimensions of folklore by looking beyond the oral world of the “simple folk” to the kinds of narrative sophistication associated with writing; it also asserts the importance of performance art in folklore analysis. The study demonstrates the durability of the black aesthetic over artistic forms.
AUTHOR BIOGRAPHY
Chiji Akọma is associate professor at Villanova University in Pennsylvania.
REVIEWS
“Chiji Akọma's innovative approach may launch a new way of reading the history of literary and cultural consciousness in contemporary literary
criticism. Folklore in New World Black Fiction extends the discussion on African Diasporic poetics that has been on-going, but has gained a
sense of urgency since Henry Louis Gates’ The Signifying Monkey and John Roberts’ From Trickster to Badman. Akọma’s book will offer a
dynamic application of oral performance aesthetics in written literature in a way that privileges that distinctiveness.” —Adélékè Adéèkó,
professor of English, The Ohio State University