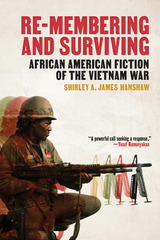 The first book-length critical study of the black experience in the Vietnam War and its aftermath, this text interrogates the meaning of heroism based on models from African and African American expressive culture. It focuses on four novels: Captain Blackman (1972) by John A. Williams, Tragic Magic (1978) by Wesley Brown, Coming Home (1971) by George Davis, and De Mojo Blues (1985) by A. R. Flowers. Discussions of the novels are framed within the historical context of all wars prior to Vietnam in which Black Americans fought. The success or failure of the hero on his identity quest is predicated upon the extent to which he can reconnect with African or African American cultural memory. He is engaged therefore in “re-membering,” a term laden with the specificity of race that implies a cultural history comprised of African retentions and an interdependent relationship with the community for survival. The reader will find that a common history of racism and exploitation that African Americans and Vietnamese share sometimes results in the hero’s empathy with and compassion for the so-called enemy, a unique contribution of the black novelist to American war literature.
AUTHOR BIOGRAPHY
SHIRLEY A. JAMES HANSHAW is Professor Emerita in the English Department at Mississippi State University where she was instrumental in establishing the first African American Studies Program. She is the recipient of a Woodrow Wilson Fellowship, a Danforth Associateship for Outstanding Teaching in the Sciences and Humanities, and a National Endowment for the Humanities Fellowship.
REVIEWS
“This superb analytical voice examines literature by four black writers—John A. Williams, Wesley Brown, A. R. Flowers, and George Davis—who are masterful storytellers shaped in the caldron of war. Through her attention to these figures, Hanshaw reveals an American voice that has been kept in obscurity. Here, the historical background illuminates a postmodern imagination.”
—YUSEF KOMUNYAKAA, winner of the 1994 Pulitzer Prize for Poetry and the Kingsley Tufts Poetry Award for Neon Vernacular: New and Selected Poems