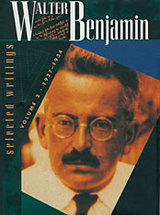 In the frenzied final years of the Weimar Republic, amid economic collapse and mourning political catastrophe, Walter Benjamin emerged as the most original practicing literary critic and public intellectual in the German-speaking world. Volume 2 of Selected Writings, covering the years 1927 to 1934, displays the full spectrum of Benjamin's achievements at this pivotal stage in his career.

Previously concerned chiefly with literary theory, Benjamin during these Years does pioneering work in new areas, from the stud of popular Culture (a discipline he virtually created) to theories of the media and the visual arts. His writings on the theory of modernity-most of them new to readers of English--develop ideas as important to an understanding of the twentieth century as an contained in his widely anthologiied essay "The Work of Art in the Age of Technological Reproducibility.

This volume brings together previously untranslated writings on major figures such as Brecht, ValÃƒÂ©ry and Gide, and on subjects ranging from film, radio, and the novel to memory, kitsch, and the theory of language. We find the manifoldly inquisitive Benjamin musing on the new modes of perception opened tip by techniques of photographic enlargement and cinematic montage, on the life and work of & Goethe at Weimar, on the fascination of old toys and the mysteries of food, and on the allegorical significance of Mickey Mouse.

Moscow, 1927
Dream Kitsch
The Political Groupings of Russian Writers
On the Present Situation of Russian Film
Reply to Oscar A. H. Schmitz
Introductory Remarks on a Series for L'HumanitÃƒÂ©
Moscow
Review of Gladkov's Cement
Journalism
Gottfried Keller
Diary of my Journey to the Loire
Review of Soupault's le Coeur d'or
The Idea of a Mystery
Review of Hessel's Heimliches Berlin
A State Monopoly on Pornography


The Return of the FlÃƒÂ¢neur, 1929
Chaplin
Program for a Proletarian Children's Theater
Surrealism
Chaplin in Retrospect
Chambermaids' Romances of the Past Century
Marseilles
On the Image of Proust
The Great Art of Making Things Seem Closer Together
Milieu Theoreticians
Children's Literature
Robert Walser
The Return of the FlÃƒÂ¢neur
Short Shadows (I)
A Communist Pedagogy
Notes on a Conversation with BÃƒÂ©la BalÃƒÂ¡sz
Some Remarks on Folk Art
Tip for Patrons

Crisis and Critique, 1930
Notes (II)
Notes (III)
Program for Literary Criticism
Notes on a Theory of Gambling
The Crisis of the Novel
An Outsider Makes His Mark
Theories of German Fascism
Demonic Berlin
Hashish, Beginning of March 1930
Julien Green
Paris Diary
Review of Kracauer's die Angestellten
Food
Bert Brecht
The First Form of Criticism that Refuses to Judge
From the Brecht Commentary
Against a Masterpiece
Myslovice--Braunschweig--Marseilles
A Critique of the Publishing Industry
Graphology Old and New
Characterization of the New Generation
The Need to Take the Mediating Character of Bourgeois Writing Seriously
False Criticism
Antitheses

The Destructive Character, 1931
In Parallel with My Actual Diary
Criticism as the Fundamental Discipline of Literary History
Critique of the New Objectivity
We Ought to Reexamine the Link between Teaching and Research
Hofmannsthal and Aleco Dossena
Left-Wing Melancholy
Theological Criticism
Karl Kraus
Literary History and the Study of Literature
German Letters
May-June 1931
Unpacking My Library
Franz Kafka: Beim Bau der Chinesischen Mauer
Diary from August 7, 1931, to the Day of My Death
Little History of Photography
Paul ValÃƒÂ©ry
The Lisbon Earthquake
The Destructive Character
Reflections on Radio
Mickey Mouse
In Almost Every Example We Have of Materialist Literary History
The Task of the Critic

Ibizan Sequence, 1932
Experience
On Ships, Mine Shafts, and Crucifixes in Bottles
On the Trail of Old Letters
A Family Drama in the Epic Theater
The Railway Disaster at the Firth of Tay
Privileged Thinking
Excavation and Memory
Oedipus, or Rational Myth
On Proverbs
Theater and Radio
Ibizan Sequence
A Berlin Chronicle
Spain, 1932
Light from Obscurantists
The Handkerchief
In the Sun
The Rigorous Study of Art
Hashish in Marseilles
The Eve of Departure
On Astrology
"Try to Ensure that Everything in Life Has a Consequence"
Notes (IV)

The Author's Producer, 1934
Once Is as Good as Never
The Newspaper
Venal but Unusable
The Present Social Situation of the French Writer
The Author as Producer
Notes from Svendborg, Summer 1934
Hitler's Diminished Masculinity
Franz Kafka

Reviews of this book:
For those who know only the small selection of essays and longer texts previously translated into English, this book may be a revelation. Selected Writings: Volume 2, spanning the period from his abandonment of academia and his emergence as an important literary journalist in 1927 to his near silencing after the Nazis seized power and his exile in 1934, shows the writer at his sparkling best...All his published work of this time is included here, from a few longer essays on themes as varied as the history of photography and Kafka to three-page pieces on recent French fiction, art history, 'the crisis of the novel,' food and the effects of hashish. The new book also includes a generous selection of Benjamin's notes, diary entries and drafts. Interesting in themselves, and indispensable to anyone seeking insight into Benjamin's thinking, they also offer a view of the writer at work, developing different aspects of a thought or recycling successful paragraphs from one assignment to another.
--Paul Mattick, New York Times Book Review

Reviews of this book:
Volume 2 of the Harvard edition, a welcome project that I cannot praise enough, is filled with astonishingly 'annihilating trivia,' as astonishing, I dare say, as Benjamin's half-dozen fully realized monographs. Thanks to it, his luminosity, on the eve of the 60th anniversary of his premature death, is happily in focus.
--Ilan Stavans, Forward

Reviews of this book:
The period from 1927 to 1934 spanned in this volume was for Walter Benjamin both grievous and fertile...The range of topics and perspectives is immense. It extends from considerations on kitsch and pornography to repeated encounters, personal or indirect, with Gide, Kierkegaard and surrealism. The cultural history of toys fascinates Benjamin as he records his own Berlin childhood. Insights into 'Left-Wing Melancholy' alternate with thoughts on Mickey Mouse, on Chaplin, and on graphology, which Benjamin practised to eke out his earnings.
--George Steiner, The Observer

Reviews of this book:
No matter how seemingly idiosyncratic the topic, Benjamin drills deep until, almost invariably, he excavates prose that sparkles with a high specific density: hard aphoristically gem-like, and often brilliant...Benjamin's Selected Writings, Volume 2, should, I think, bowl over and beguile any who, caring about the life of the mind, have not yet succumbed to the bearish charms of this gloomy observer of his besotted times. Wherever he turned his incisive gaze the clarity of morning's first light shines forth.
--Haim Chertok, Jerusalem Post

Reviews of this book:
While the Harvard series [of Walter Benjamin's writings includes] Benjamin's epochal contributions to Marxist theory and literary criticism, they also do English-language readers a great service by emphasizing his more accessible writings: fanciful personal essays, journalistic articles and book reviews. These pieces are, at times, giddily delightful; at other moments, they offer lightening-quick, piercing insights. Particularly surprising are the writings on food, such as an account of buying a bunch of figs from an open-air market and consuming them all in a frenzy. Benjamin concludes that one only understands the essence of a given food when one continues to eat it past the point of disgust.
--Publishers Weekly