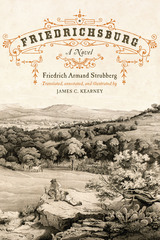 Winner, Summerfield G. Roberts Award for a Work of Creative Writing, Sons of the Texas Republic, 2013

Founded in 1846, Fredericksburg, Texas, was established by German noblemen who enticed thousands of their compatriots to flee their overcrowded homeland with the prospect of free land in a place that was portrayed as a new Garden of Eden. Few of the settlers, however, were prepared for the harsh realities of the Texas frontier or for confrontation with the Comanche Indians. In his 1867 novel Friedrichsburg, Friedrich Armand Strubberg, a.k.a. Dr. Schubbert, interwove his personal story with a fictional romance to capture the flavor of Fredericksburg, Texas, during its founding years when he served as the first colonial director.

Now available in a contemporary translation, Friedrichsburg brings to life the little-known aspects of life among these determined but often ill-equipped settlers who sought to make the transition to a new home and community on the Texas frontier. Opening just as a peace treaty is being negotiated between the German newcomers and the Comanches, the novel describes the unlikely survival of these fledgling homesteads and provides evidence that support from the Delaware Indians, as well as the nearby Mormon community of Zodiac, was key to the Germans’ success. Along the way, Strubberg also depicts the laying of the cornerstone to the Vereinskirche, the blazing of an important new road to Austin, exciting hunting scenes, and an admirable spirit of cultural cohesion and determined resilience. In so doing, he resurrects a fascinating lost world.

James C. Kearney, who holds a Ph.D. from the University of Texas at Austin, taught German for many years at Katy High School in Katy, Texas. He has been a longtime student of the history of the German settlements in Texas. His book Nassau Plantation was the first study to make extensive use of the Solms-Braunfels Archives, the official records of the Society for the Protection of German Emigrants in Texas.

REVIEWS
But it is Kearney’s introduction to Friedrichsburg that makes this volume a must-read for historians as well as descendants of these German immigrants…for descendants of German immigrants who wish to experience the kind of popular literature that entertained their ancestors, even the melodramatic episodes of this novel will be informative and entertaining.
— Betty Holland Wiesepape, Texas Books in Review