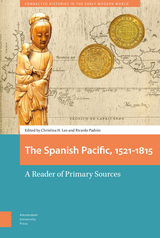 The Spanish Pacific, 1521-1815: A Reader of Primary Sources
edited by Christina Lee and Ricardo Padrón
Amsterdam University Press, 2020
eISBN: 978-90-485-5227-6
The Spanish Pacific designates the space Spain colonized or aspired to rule in Asia between 1521--with the arrival of Ferdinand Magellan--and 1815--the end of the Manila-Acapulco galleon trade route. It encompasses what we identify today as the Philippines and the Marianas, but also China, Japan, and other parts of Asia that in the Spanish imagination were extensions of its Latin American colonies. This reader provides a selection of documents relevant to the encounters and entanglements that arose in the Spanish Pacific between European, Spanish Americans, and Asians while highlighting the role of natives, mestizos, and women. A-first-of-its-kind, each of the documents in this collection was selected, translated into English, and edited by a different scholar in the field of early modern Spanish Pacific studies, who also provided commentary and bibliography.
AUTHOR BIOGRAPHY
Christina H. Lee is Associate Professor of Spanish and Portuguese at Princeton University. She has written extensively about religion and race in the making of the Spanish identity in the early modern period. Her book publications include The Anxiety of Sameness in Early Modern Spain (Manchester UP, 2015), Reading and Writing Subjects in Medieval and Golden Age Spain, with José Luis Gastañaga (Juan de la Cuesta, 2016), Western Visions of the Far East in a Transpacific Age (Routledge, 2012), and the critical edition of Lope de Vega's Los mártires de Japón (Juan de la Cuesta, 2006). Her current book project analyzes forms of dissent in globalized forms of Catholicism in the Spanish Philippines.Ricardo Padrón is Associate Professor of Spanish at the University of Virginia. He is the author of The Spacious Word: Cartography, Literature and Empire in Early Modern Spain (U of Chicago P, 2004), and The Indies of the Setting Sun: The Pacific and Asia in the Spanish Geopolitical Imagination, 1513-1610 (U of Chicago P, forthcoming).
TABLE OF CONTENTS


Acknowledgements List of FiguresIntroduction. Christina Lee and Ricardo Padrón1. An Early Transpacific Account on the Spice Islands by Andrés de Urdaneta (1536). Jorge Mojarro 2. Domingo de Salazar's Letter to the King of Spain in Defense of the Indians and the Chinese of the Philippine Islands (1582). Christina Lee3. Juan Cobo's Map of the Pacific World, 1593. Ricardo Padrón4. A Royal Decree of Philip III Regulating Trade between the Philippines and New Spain (1604). Natalie Cobo and Tatiana Seijas5. Manila's Sangleys and a Chinese Wedding (1625). Miguel Martínez 6. Don Luis Castilla Offers to Sell Land in Manila (1629). Regalado Trota José7. Idolatry and Apostasy in the 1633 Jesuit Annual Letter. John Blanco8. The Will of an India Oriental and her Chinos in Peru (1644). Leo Garofalo9. Francisco de Combés's History of Mindanao and Jolo (1667). Ana M. Rodríguez Rodríguez. Translation assisted by Cortney Benjamin10. Between Fiction and History in the Spanish Pacific: The Misfortunes of Alonso Ramírez (1690). Nicole Legnani11. A Moluccan Crypto-Muslim before the Transpacific Inquisition (1623-1645). Ryan Dominic Crewe12. Constitutions and Rules of the Beatas Indias (1726). Kathryn Santner 13. The Poetics of Praise and the Demands of Confession in the Early Spanish Philippines: Notes and Documents. Vicente L. Rafael14. The Pacific Theater of the Seven Years' War in a Latin Poem by an Indigenous Priest, Bartolomé?Saguinsín (1766). Stuart M. McManus 15. A Prohibition on Digging Up the Bones of the Dead (1813). Ino ManaloIndex