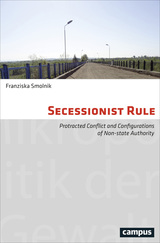 Secessionist Rule: Protracted Conflict and Configurations of Non-State Authority
by Franziska Smolnik
Campus Verlag, 2016
Paper: 978-3-593-50629-6
In this timely investigation of secessionist entities in post-Soviet territories, Smolnik explores how political authority is organized, produced, and reproduced in conditions of violent conflict. Drawing on case studies of unrecognized or only partially recognized states in the South Caucasus, she shows that so-called low-level violent conflicts may significantly influence the form and functioning of political rule and thereby have a considerable impact on the empowerment and disempowerment of local actors. Offering fresh insight into the connections between violence and political power, Secessionist Rule not only contributes to the political sociology of violent conflict, but also adds to our knowledge of the largely understudied internal dynamics of de facto states.
AUTHOR BIOGRAPHY
Franziska Smolnik is a research associate at the German Institute for International and Security Affairs, Eastern Europe and Eurasia Division.