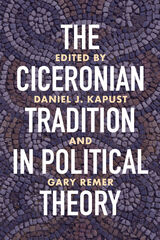 Cicero is one of the most influential thinkers in the history of Western political thought, and interest in his work has been undergoing a renaissance in recent years. The Ciceronian Tradition in Political Theory focuses entirely on Cicero’s influence and reception in the realm of political thought.

Individual chapters examine the ways thinkers throughout history, specifically Augustine, John of Salisbury, Thomas More, Machiavelli, Montaigne, Hobbes, Locke, Adam Smith, and Edmund Burke, have engaged with and been influenced by Cicero. A final chapter surveys the impact of Cicero’s ideas on political thought in the second half of the twentieth century. By tracing the long reception of these ideas, the collection demonstrates not only Cicero’s importance to both medieval and modern political theorists but also the comprehensive breadth and applicability of his philosophy.
AUTHOR BIOGRAPHY
Daniel J. Kapust is a professor of political science at the University of Wisconsin–Madison, where he also directs the Political Economy, Philosophy, and Politics Program and is the director of the Center for Early Modern Studies. He is the author of Flattery and the History of Political Thought: That Glib and Oily Art. Gary Remer is a professor of political science at Tulane University and the author of Ethics and the Orator: The Ciceronian Tradition of Political Morality.
REVIEWS
“Kapust and Remer have collected a set of essays that justify the current revival of philosophical interest in Cicero by demonstrating his importance to major medieval and modern political thinkers. The comprehensive nature of Cicero’s political philosophy is manifest in this fine book.”—David Fott, University of Nevada, Las Vegas


“This collection offers its readers substantive and incisive essays about the complicated topic of the reception of Cicero by the subsequent tradition of political theory. Taken singly, the essays give us profound introductions to how the greatest individual authors in the tradition struggled with the massive shadow cast by Cicero on the politics of the Western world. Taken as a whole, the collection gives us a profound introduction to Cicero’s extensive legacy within the Western political experience.”—Douglas Kries, Gonzaga University