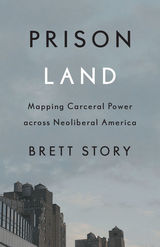 From broken-window policing in Detroit to prison-building in Appalachia, exploring the expansion of the carceral state and its oppressive social relations into everyday life

Prison Land offers a geographic excavation of the prison as a set of social relations—including property, work, gender, and race—enacted across various landscapes of American life. Prisons, Brett Story shows, are more than just buildings of incarceration bound to cycles of crime and punishment. Instead, she investigates the production of carceral power at a range of sites, from buses to coalfields and from blighted cities to urban financial hubs, to demonstrate how the organization of carceral space is ideologically and materially grounded in racial capitalism.

Story’s critically acclaimed film The Prison in Twelve Landscapes is based on the same research that informs this book. In both, Story takes an expansive view of what constitutes contemporary carceral space, interrogating the ways in which racial capitalism is reproduced and for which police technologies of containment and control are employed. By framing the prison as a set of social relations, Prison Land forces us to confront the production of new carceral forms that go well beyond the prison system. In doing so, it profoundly undermines both conventional ideas of prisons as logical responses to the problem of crime and attachment to punishment as the relevant measure of a transformed criminal justice system.

Brett Story is a documentary filmmaker, geographer, and assistant professor in the School of Image Arts at Ryerson University. Her award-winning film The Prison in Twelve Landscapes is based on the same research that informs Prison Land.