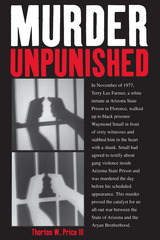 Murder Unpunished: How the Aryan Brotherhood Murdered Waymond Small and Got Away with It
by Thornton W. Price III
University of Arizona Press, 2005
Paper: 978-0-8165-2463-1
In November of 1977, Terry Lee Farmer, a white inmate at Arizona State Prison in Florence, walked up to black prisoner Waymond Small in front of sixty witnesses and stabbed him in the heart with a shank. Small had agreed to testify before the state legislature about gang violence inside Arizona State Prison and was murdered the day before his scheduled appearance. This murder proved the catalyst for an all-out war between the State of Arizona and the Aryan Brotherhood. Through five trials, Farmer claimed self-defense and the jurors acquitted all ten of his co-conspirators.

Thornton Price, one of the defense attorneys, now tells how Farmer and Small became cannon fodder in this war to reclaim Arizona’s prisons from rival gangs. These gangs—the Aryan Brotherhood, the Mau Maus, and the Mexican Mafia—were suspected of committing more than a dozen murders over the previous two years, motivating politicians to crack down after the violence could no longer be ignored or contained. To reconstruct the case, Price reviewed 16,000 pages of court records and conducted interviews with key participants to piece together an insider’s account of the crime and the politics behind its investigation. Prison murders should be easy to solve, but investigators quickly learned that the convicts’ code of silence makes these cases often impossible to win in court.

Price focuses on the special problems posed by prison crime by getting inside the skins of men like murderer Terry "Crazy" Farmer and William "Red Dog" Howard, one of the Florence Eleven and a founder of the Aryan Brotherhood. He also presents the perspectives of state investigators and reveals how they calculated to pit black witnesses against white killers until one black would break the code of silence and provoke feuding within the Brotherhood.

Murder Unpunished tells how society’s most outrageous criminals ran the prison through gang violence as outside the walls Arizona struggled to outgrow its Wild West past. Like few other books, it reveals how prisons incubate predatory criminals and gangs, and it exposes the unique difficulties of prosecuting prison crimes. It is a gripping account that cuts to the heart of our penal system and a cautionary tale for citizens who prefer to keep prisons out of sight, out of mind.

AUTHOR BIOGRAPHY
Thornton "Terry" Price is an attorney who lives in Durango, Colorado.
REVIEWS
"This is entertaining, educational and compelling." —Durango Herald"This is a corking good book. Don't wait for the movie; read the book." —Journal of Arizona History