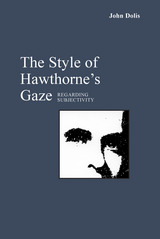 The Style of Hawthorne’s Gaze is an unusual and insightful work that employs a combination of critical strategies drawn from art history, philosophy, psychoanalysis, and contemporary aesthetic and literary theory to explore Nathaniel Hawthorne’s narrative technique and his unique vision of the world. Dolis studies Hawthorne’s anti-technological and essentially Romantic view of the external world and examines the recurring phenomena of lighting, motion, aspectivity, fragmentation, and imagination as they relate to his descriptive techniques.

Dolis sets the world of Hawthorne’s work over and against the aesthetic and philosophical development of the world understood as a “view”, from its inception in the camera obscura and perspective in general, to its 19th-century articulation in photography. In light of this general technology of the image, and drawing upon a wide range of contemporary critical theories, Dolis begins his study of Hawthorne at the level of description, where the world of the work first arises in the reader’s consciousness. Dolis shows how the work of Heidegger, Merleau-Ponty, Freud, Lacan, and Derrida can provide fresh insights into the sophisticated style of Hawthorne’s perception of and system for representing reality.
AUTHOR BIOGRAPHY
John Dolis is professor of English and American Studies and Coordinator, International Programs at Penn State University, Scranton. He is the author of Tracking Thoreau: Double-Crossing Nature and Technology and Transnational Na(rra)tion: Home and Homeland in Nineteenth-Century American Literature.
REVIEWS