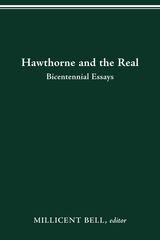 In this edited collection commemorating the bicentennial of Hawthorne’s birth in 1804, Millicent Bell gathers essays by distinguished scholars and critics that examine the ways in which Hawthorne related himself to the “real” in his own world and expressed that relation in his writing. Radically revising the older view that he was detached from conditions of actual life in 19th-century American society, the authors undertake to show how current social conditions, current events, and political movements taking place at a crucial point in American history were an evident part of Hawthorne’s consciousness. The essays situate his imaginative writings in a contemporary context of common experience and rediscover a Hawthorne alert to pressing problems of his day, especially slavery, feminism, and reform in general—the very issues that motivated his contemporaries on the eve of the Civil War. Hawthorne was, with his own complicity, long described as a writer of unreal romances (as he preferred to call his novels) or “allegories of the heart” as he termed some of his short stories. But the literary mode of his fiction has long needed to be redefined. The essays in this collection contribute to the turn in recent Hawthorne criticism which shows how deeply implicated in realism his writing was. This volume should long continue to provide new starting points for changing views of a great writer.
Contributors:
AUTHOR BIOGRAPHY
Millicent Bell, past president of the Nathaniel Hawthorne Society and author of Hawthorne’s View of the Artist, as well as other books on Hawthorne and other writers, is professor emerita at Boston University.
REVIEWS
“The volume's strong scholarship, varied subject matter, and diverse critical approaches promise to make it a milestone of Hawthorne criticism.”
—Dennis Berthold, Texas A&M University