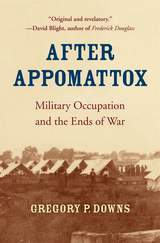 In April 1865, Robert E. Lee wrote to Ulysses S. Grant asking for peace. Peace was beyond his authority to negotiate, Grant replied, but surrender terms he would discuss. The distinction proved prophetic.

After Appomattox reveals that the Civil War did not end with Confederate capitulation in 1865. Instead, a second phase of the war began which lasted until 1871—not the project euphemistically called Reconstruction, but a state of genuine belligerence whose mission was to shape the peace. Using its war powers, the U.S. Army oversaw an ambitious occupation, stationing tens of thousands of troops in outposts across the defeated South. This groundbreaking history shows that the purpose of the occupation was to crush slavery in the face of fierce and violent resistance, but there were limits to its effectiveness: the occupying army never really managed to remake the South.

“The United States Army has been far too neglected as a player—a force—in the history of Reconstruction… Downs wants his work to speak to the present, and indeed it should.”
—David W. Blight, The Atlantic

“Striking… Downs chronicles…a military occupation that was indispensable to the uprooting of slavery.”
—Boston Globe

“Downs makes the case that the final end to slavery, and the establishment of basic civil and voting rights for all Americans, was ‘born in the face of bayonets.’ …A remarkable, necessary book.”
—Slate

REVIEWS
Downs persuasively argues that a long and persistent ‘occupation’ occurred for at least three years, and perhaps as long as six years, after the end of actual hostilities in spring, 1865. Downs also demonstrates that, although a massive demobilization of Union troops occurred in 1865–66, the United States Army has been far too neglected as a player—a force—in the history of Reconstruction… Downs wants his work to speak to the present, and indeed it should.
-- David W. Blight The Atlantic


[Downs] makes a persuasive…case that virtually none of the achievements of Reconstruction—there were more than is generally supposed—could have taken place without the use or at least the threat of military force. He challenges the view that defeated Confederates in 1865 were ready to acquiesce in whatever reorganization the federal government imposed on them, including the bestowal of civil rights on blacks… Downs rightly regards the appalling white-on-black violence of the late 1860s and early 1870s as systemic terrorism… In Downs’s telling, Reconstruction was also one of the finest hours of the U.S. Army.
-- Fergus M. Bordewich Wall Street Journal


In After Appomattox, Downs makes the case that the final end to slavery, and the establishment of basic civil and voting rights for all Americans, was ‘born in the face of bayonets.’ Put simply, the military occupation created democracy as we know it. Downs’ book couldn’t come at a more opportune time, as American forces once again face the difficult question of how long, and to what ends, an occupying army must stay in conquered territory. After more than a decade of fighting abroad, we may be too war-weary to see that military occupations are sometimes a good, even necessary thing… The brilliance of Downs’ argument is that he steals the central complaint of the apologists, yet reverses the conclusion: The federal government was overzealous—and that was a good thing. Congress had to impose martial law in order for blacks to gain basic freedoms. If military officers sometimes vacated racist local laws, if they removed ruthless sheriffs and judges, if they tried white supremacists in unfair military tribunals—all of which they did—they did so for necessary ends. Equality would come to the South no other way… Downs has produced a remarkable, necessary book.
-- Eric Herschthal Slate


In a striking new book, After Appomattox, historian Gregory Downs chronicles the years of military occupation that followed Lee’s surrender to Grant in 1865—a military occupation that was indispensable to the uprooting of slavery and the political empowerment of freed slaves. In the face of Southern white supremacist hostility, it was only the continuing presence of federal troops in the South that could break up remaining pockets of rebellion, establish the right of blacks to vote and seek election, void discriminatory laws, and unilaterally remove disloyal or racist sheriffs and judges from office.
-- Jeff Jacoby Boston Globe


Downs resets our sights on the military occupation that did occur, and he argues for its centrality in helping to fashion whatever gains African-Americans managed to achieve. In talking about military occupation, numbers matter, and his research has fixed them with a precision previously lacking… After Appomattox is a timely, important book that casts new light on the meaning of occupation during Reconstruction, and raises challenging questions about the relationship between military power and civil rights in today’s climate of never-e​nding war.
-- Louis P. Masur Chronicle of Higher Education


Downs has written an important book challenging assumptions about the post–Civil War era and the ways in which historians define ‘wartime’ and ‘peacetime.’ He contends that Lee’s surrender at Appomattox did not bring peace, but rather a second phase of war—an insurgency and war of occupation that did not ‘end’ until 1871. Downs problematizes the idea of ‘reconstruction.’ Whatever accomplishments came in that era—civil rights, a national definition of citizenship—came as a result of military force rather than deliberative politics. Challenging scholars who argue that too few Union troops for a meaningful occupation remained in the postwar South, Downs demonstrates through impressive research that there was actually a significant military presence, both numerically and geographically. But even this presence had its limits, and outside the pale, terrorists and violence plagued the South. By framing the period as an occupation and insurgency, the author has done much to reveal the violent, contested, and contingent nature of the post–Civil War US. Required reading for scholars of the Civil War era.
-- K. M. Gannon Choice


Downs examines Reconstruction as primarily a military operation. In order to secure civil rights for freed slaves, Northern republicans had to rely on additional constitutional war powers. From a legal standpoint, the Civil War did not end with the surrender of Confederate armies but lasted until 1871 when Georgia’s senator was seated. While many opponents of Reconstruction were motivated by racism, others were compelled by a fear of unchecked military power. How to approach Reconstruction even divided radical Republicans. Downs convincingly argues that the U.S. government should have expanded and extended the use of war powers in the South in order to secure justice and freedom for freed slaves… This work will appeal to general readers as well as specialists interested in a fresh understanding of Reconstruction.
-- Michael Farrell Library Journal


After Appomattox demonstrates how a long and ambitious military occupation aimed to secure freedom for the newly emancipated in the violent, lawless, and chaotic South. Original and revelatory, it has tremendous potential to change our understanding of American Reconstruction.
-- David W. Blight, author of American Oracle: The Civil War in the Civil Rights Era


Moving brilliantly between the lived experience of the Civil War’s forgotten final six years and the fierce legal debates in Washington, After Appomattox is the definitive work on a great paradox of American democracy: the post–Civil War expansion of rights arose out of and depended upon the awesome powers of the wartime state. Downs masterfully reveals how controversies over war powers shaped the course of American freedom. A fundamental rethinking of what we can now call America’s Ten Years’ War.
-- John Fabian Witt, author of Lincoln’s Code: The Laws of War in American History


Downs demonstrates that the end of the Civil War marked the beginning of another war: the violent struggle for the rights of African Americans that resulted from military occupation of the South and political battles in Washington. After Appomattox is a landmark account of the death throes of slavery and the stormy rise of Reconstruction.
-- David S. Reynolds, author of John Brown, Abolitionist and Walt Whitman’s America

TABLE OF CONTENTS
Contents
Note on Sources
Introduction: The War That Could Not End
1. After Surrender
2. Emancipation at Gunpoint
3. The Challenge of Civil Government
4. Authority without Arms
5. The War in Washington
6. A False Peace
7. Enfranchisement by Martial Law
8. Between Bullets and Ballots
9. The Perils of Peace
Conclusion: A Government without Force
Appendixes
Abbreviations
Notes
Acknowledgments
Index