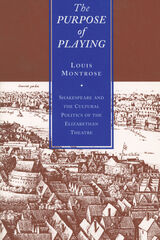 Part of a larger project to examine the Elizabethan politics of representation, Louis Montrose's The Purpose of Playing refigures the social and cultural context within which Elizabethan drama was created.

Montrose first locates the public and professional theater within the ideological and material framework of Elizabethan culture. He considers the role of the professional theater and theatricality in the cultural transformation that was concurrent with religious and socio-political change, and then concentrates upon the formal means by which Shakespeare's Elizabethan plays called into question the absolutist assertions of the Elizabethan state. Drawing dramatic examples from the genres of tragedy and history, Montrose finally focuses his cultural-historical perspective on A Midsummer Night's Dream.

The Purpose of Playing elegantly demonstrates how language and literary imagination shape cultural value, belief, and understanding; social distinction and interaction; and political control and contestation.
TABLE OF CONTENTS


Acknowledgments
To The Reader
Prologue
Texts and Histories
Pt. 1: Drama, Theatre, Society, and the State: Form and Pressure
I: The Reformation of Playing
II: A Theatre of Changes
III: Anatomies of Playing
IV: The Theatre, the City, and the Crown
V: From the Stage to the State
VI: The Power of Personation
VII: The Cross-Purposes of Playing
Pt. 2: The Shaping Fantasies of A Midsummer Night's Dream
VIII: The Discord of This Concord
IX: Stories of the Night
X: The Imperial Votaress
XI: Bottom's Dream
Epilogue: A Kingdom of Shadows
Index