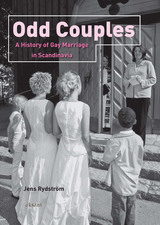 The concept of marriage as a union of a man and a woman was fundamentally challenged by the introduction of registered partnership in Denmark in 1989. Odd Couples is the first comprehensive history of registered partnership and gay marriage in Scandinavia. It traces the origins of laws which initially were extremely controversial—inside and outside the gay community—but have now gained broad popular and political support, as well as the positive effects and risks involved in state recognition of lesbian and gay couples.  Through a comparison of how these laws have been received and practiced in all of the Scandinavian countries, including Greenland and the Faroe Islands, the author presents a nuanced study of a fascinating political process that began in the 1960s and continues to change the way we understand family, sexuality and nation.

AUTHOR BIOGRAPHY
Jens Rydstrom is associate professor at the Centre for Gender Studies at Lund University in Sweden. He is the author of Sinners and Citizens, published by the University of Chicago Press.
TABLE OF CONTENTS