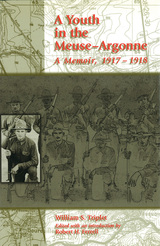 A Youth in the Meuse-Argonne is a firsthand account of World War I through the eyes of an enlisted soldier. William S. Triplet was a seventeen-year-old junior in high school when, on April 2, 1917, President Woodrow Wilson asked for a declaration of war. Passed by Congress and signed by the nation's chief executive four days later, this declaration stirred the superintendent of schools in Triplet's hometown of Sedalia, Missouri, to make an emotional plea to all eligible students to join the armed forces. "Any student who felt called upon to fight, bleed, and die for his country could receive his graduation diploma upon his return from the war." Triplet was eighteen months short of being of legal enlistment age, but the army didn't check birth certificates. The appeal of military benefits—room and board, travel, adventure, and fifteen dollars a month, plus knowing he would receive his high school diploma—was too much for the young Triplet to pass up. Thus began William S. Triplet's remarkable career in the U.S. Army, in which he served until his retirement as a full colonel in 1954.

In A Youth in the Meuse-Argonne, Triplet covers the early years of his service in Company D, 140th Infantry Regiment, 35th Division, from shortly after the time of his enlistment in 1917 to his honorable discharge in 1919. During those months he participated in several actions, most notably the battle of the Meuse-Argonne. With both elegance and a touch of humor, he masterfully portrays the everyday life of the soldier, humanizing the men with whom he served. His vivid depictions of how soldiers fought give the reader a much clearer view of the terrifying experiences of combat. He also touches on the special problems he encountered as a sergeant with an infantry platoon composed of soldiers from many different walks of life.

In writing this memoir, Triplet relied heavily on a detailed diary that he kept while he was in France in 1918. Through his annotations, Robert H. Ferrell provides the historical context for Triplet's firsthand experiences. The result is a compelling memoir that offers insight into the lives of the soldiers who served during World War I. Anyone with an interest in World War I or military history in general will find A Youth in the Meuse-Argonne of great interest.

"This work contains every ingredient necessary for a successful soldier's memoir. It is written with impressive literary quality even though it is completely unpretentious. Triplet's is a soldier's memoir of exceptional quality."—Russell F. Weigley