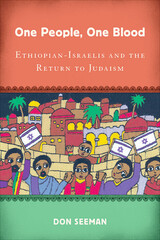 "Little by little, an egg will come to walk upon its own leg." Ethiopian-Israelis fondly quote this bit of Amharic folk wisdom, reflecting upon the slow, difficult history that allowed them to fulfill their destiny far from the Horn of Africa where they were born.

But today, along with those Ethiopians who have been recognized as Jews by the State of Israel, many who are called "Feres Mura," the descendants of Ethiopian Jews whose families converted to Christianity but have now reasserted their Jewish identity, still await full acceptance in Israel. Since the 1990s, they have sought homecoming through Israel's "Law of Return," but have been met with reticence and suspicion on a variety of fronts. One People, One Blood expertly documents this tenuous relationship and the challenges facing the Feres Mura.

Distilling more than ten years of ethnographic research, Don Seeman depicts the rich culture of the group, as well as their social and cultural vulnerability, and addresses the problems that arise when immigration officials, religious leaders, or academic scholars try to determine the legitimacy of Jewish identity or Jewish religious experience.

AUTHOR BIOGRAPHY
DON SEEMAN is an associate professor in the department of religion and the Tam Institute for Jewish Studies at Emory University.
REVIEWS
"Written with grace and thoroughly researched, One People, One Blood is an ethnography with a lot of heart that also sheds new light on a fascinating and fraught chapter in recent Jewish history."
— Ruth Behar, author of An Island Called Home: Returning to Jewish Cuba

"Seeman has an eye for multifaceted complexity, and a gift for sensitive exploration of the many tough issues that the existence of the 'Feres Mura' has raised. The book also offers great insight into the concerns and thought processes of morally serious ethnographers."
— Jewish Book World