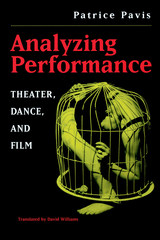 Analyzing Performance provides conceptual tools for understanding a range of performance, including theater, dance, cinema, other audiovisual media, and mime. This richly illustrated book develops protocols for the analysis of performance at every level -- from the minute gestures and facial expressions of an actor to the social network in which theater is embedded -- and respects the importance of every aspect of performance, including actor, costume, space, time, music, and lighting. With a keen awareness of the roles of social context in the interpretation of performance, Patrice Pavis leads the reader from a purely formal analysis to a semiology and anthropology of performance, where spectator and actor are equally objects of study. Drawn from performance traditions and innovations all over the world, the book's many examples make critical techniques vivid and concrete.
Analyzing Performance will be essential reading for critics, scholars, students, and practitioners of theater, who will find that David Williams's elegant translation brings Pavis's insights within reach of English-language readers.
Patrice Pavis, Professor of Theater at Paris-VIII University, has written extensively and influentially on performance.
David Williams is Professor of Theater, Dartington College of Arts, Devon, England.
AUTHOR BIOGRAPHY

Patrice Pavis , Professor of Theater at Paris-VIII University, has written extensively and influentially on performance.