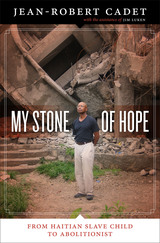 There are 27 million slaves living in the world today—more than at any time in history. Three hundred thousand of them are impoverished children in Haiti, who "stay with" families as unpaid and uneducated domestic workers, subject to physical, emotional, and sexual abuse. This practice, known locally as restavek ("staying with"), is so widespread that one in ten Haitian children is caught up in this form of slavery.

Jean-Robert Cadet was a restavek in Haiti from the late 1950s until the early 1970s. He told the harrowing story of his youth in Restavec: From Haitian Slave Child to Middle-Class American—a landmark book that exposed ongoing child slavery in Haiti. Now in My Stone of Hope, Cadet continues his story from his early attempts to adjust to freedom in American society to his current life mission of eliminating child slavery through advocacy and education. As he recounts his own struggles to surmount the psychological wounds of slavery, Cadet puts a human face on the suffering that hundreds of thousands of Haitians still endure daily. He also builds a convincing case that child slavery is not just one among many problems that Haiti faces as the Western Hemisphere's poorest nation. Rather, he argues that the systematic abuse of so many of its children is Haiti's fundamental problem, because it creates damaged adults who seem incapable of governing the country justly or managing its economy productively.

For everyone concerned about the fate of Haiti, the welfare of children, and the freedom of people around the globe, My Stone of Hope sounds an irresistible call to action.

Jean-Robert Cadet founded the Jean R. Cadet Restavek Organization to bring an end to child slavery in Haiti through increased global awareness of the issue while also providing immediate relief to children trapped in the restavek system. His consultations with the Haitian government and prominent citizens, and his appearances on radio shows and in schools in Port-au-Prince, are changing attitudes in Haitian society. He continues to raise global awareness by speaking at high schools and universities across the United States and to government organizations around the world. Cadet has addressed the United Nations, the International Labor Organization, and the U.S. Senate, and has also appeared on CNN, the Oprah Winfrey Show, and 60 Minutes.