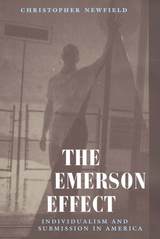 This book presents a revisionist account of Ralph Waldo Emerson's influential thought on individualism, in particular his political psychology.

Christopher Newfield analyzes the interplay of liberal and authoritarian impulses in Emerson's work in various domains: domestic life, the changing New England economy, theories of poetic language, homoerotic friendship, and racial hierarchy. Focusing on neglected later writings, Newfield shows how Emerson explored the tensions between autonomy and community—and consistently resolved these tensions by "abandoning crucial elements of both" and redefining autonomy as a kind of liberating subjection. He argues that in Emersonian individualism, self-determination is accompanied by submission to authority, and examines the influence of this submissive individualism on the history of American liberalism. In a provocative reading of Emerson's early and neglected later works, Newfield analyzes Emerson's emphasis on collective, or "corporate", world-building, rather than private possession. Tracing the development of this corporate individualism, he illuminates contradictions in Emerson's political outlook, and the conjunctions of liberal and authoritarian ideology they produced.
TABLE OF CONTENTS