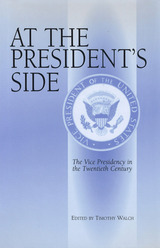 At the President's Side
The Vice Presidency in the Twentieth Century
Edited by Timothy Walch
University of Missouri Press, 1997

The nation's first vice president, John Adams, called his job "the most insignificant office ever the invention of man contrived or his imagination conceived." And many of the forty-four men who succeeded him in the office have said much worse. Perhaps the biggest problem is that the job has a fancy title, but few responsibilities. Other than presiding over the Senate, the vice president of the United States has no constitutional duties. In fact, it is not even clear that the founders of the republic ever intended that the vice president would succeed to the presidency upon the death of an incumbent.

Yet, despite the relative obscurity of the position, few politicians turn down the opportunity to serve as vice president of the United States. Being elected vice president is often a stepping-stone to the presidency. Since World War II, five vice presidents—Harry Truman, Richard Nixon, Lyndon Johnson, Gerald Ford, and George Bush—have gone on to become president. While it may not be glamorous, the vice presidency is an important training ground for national leadership.

The essays in this book trace the evolution of the vice presidency in the twentieth century from Theodore Roosevelt to Dan Quayle. The first five chapters tell the stories of a colorful collection of the men chosen because of their native states or their political acumen, but not their leadership abilities. The next four chapters form a mosaic of tragedy. Richard Nixon rose from the vice presidency to the presidency only to be forced from office. Lyndon Johnson's tenure ended unhappily because of the prolonged fighting in Vietnam. Hubert Humphrey was humiliated as vice president by a man who should have known better. And Spiro Agnew was rousted from the office by petty greed.

The following four chapters tell the story of a new vice presidency. Nelson Rockefeller, Walter Mondale, George Bush, and Dan Quayle redefined the job that not many people wanted but that few could refuse. In a particularly valuable essay, Quayle reflects on the checkered past of his predecessors, gives credit to Walter Mondale for rehabilitating the vice presidency, and tells of his working relationship with George Bushþoffering a unique glimpse of an office that is quickly becoming the second most powerful in the nation.

Addressing the future of the office, Richard E. Neustadt provides a detailed analysis of the nucleus of vice presidential powerþproximity to the president. To whit, we have Neustadt's maxim: "The power and influence of a vice president is inversely proportional to the political distance between that vice president and his president. The greater the distance the less the power." 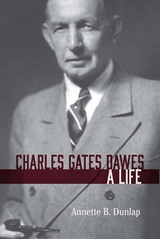 Charles Gates Dawes: A Life is the first comprehensive biography of an American in whose fascinating story contemporary readers can follow the struggles and triumphs of early twentieth-century America and Europe.

Dawes is most known today as vice president of the United States under Calvin Coolidge, but he also distinguished himself and his hometown of Evanston, Illinois, on the world stage with the 1925 Nobel Peace Prize. This engrossing biography traces how, when the punitive armistice that ended the First World War resulted in a disabled, restive Germany, Dawes’s diplomatic legerdemain averted war through a renegotiation of Germany’s debt repayments.

Dawes’s diplomatic and political achievements, however, were only the illustrious capstones to a multifaceted career that included military service, law, finance, and business on the local, state, national, and global stages. In every arena of his life, he combined the social graces of the Gilded Age with the spirit of service of the Progressive Era.

Despite his life of disciplined service, Dawes was an ebullient and irrepressible figure. Dawes’s salty language was often colorful fodder for tabloid and magazine writers of his era. In this captivating biography, Annette B. Dunlap recounts the story of an original American who enlightened and enlivened his world.

This book was published in cooperation with the Evanston History Center and with generous support from the Tawani Foundation. 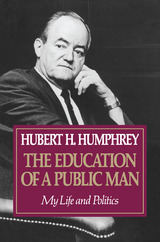 Education Of A Public Man
My Life and Politics
Hubert Humphrey
University of Minnesota Press, 1991