Alcatraz Screw
My Years as a Guard in America's Most Notorious Prison
George H. Gregory & Intro by John W. Roberts
University of Missouri Press, 2002
Alcatraz Screw is a firsthand account from a prison guard’s perspective of some of the most storied years at the infamous U.S. Penitentiary at Alcatraz. George Gregory began his career as a guard for the Federal Bureau of Prisons in 1940. Following his training, he was sent to the federal prison at Sandstone, Minnesota. A few years later he enlisted in the Marine Corps. Badly wounded at Iwo Jima, he returned to Sandstone after a long rehabilitation. When the Bureau of Prisons closed Sandstone in 1947, Gregory was transferred to Alcatraz, which had been a federal penitentiary since 1934.
For the next fifteen years, Gregory worked on “The Rock.” He takes the reader along on a correctional officer’s tour of duty, showing what it was like to pull a lonely, tedious night of sentry duty in the Road Tower, or witness illicit transactions in the clothing room, or forcibly quell a riot in the cell blocks. Gregory provides an insider’s account of the tenures of all four of Alcatraz’s wardens and their sometimes contradictory approaches to administering the institution. He knew and regularly interacted with such legendary inmates as Robert Stroud (the Birdman of Alcatraz) and George “Machine Gun” Kelly.
Without glamorizing or demonizing either the staff or the convicts, Alcatraz Screw provides a candid portrayal of corruption, drug abuse, and sexual practices, as well as efforts at reform and unrecorded acts of kindness. Various incidents in the memoir convey the fear, hatred, frustration, boredom, and unavoidable tension of being incarcerated. With the inclusion of maps and diagrams of Alcatraz Island, as well as photographs of inmates, officers, and the prison itself, this book offers insight into life at the notorious Alcatraz from an unprecedented perspective.
[more] 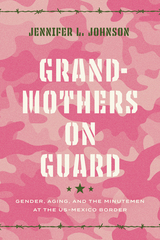 Grandmothers on Guard
Gender, Aging, and the Minutemen at the US-Mexico Border
By Jennifer L. Johnson
University of Texas Press, 2021

For about a decade, one of the most influential forces in US anti-immigrant politics was the Minuteman Project. The armed volunteers made headlines patrolling the southern border. What drove their ethno-nationalist politics?

Jennifer L. Johnson spent hundreds of hours observing and interviewing Minutemen, hoping to answer that question. She reached surprising conclusions. While the public face of border politics is hypermasculine—men in uniforms, fatigues, and suits—older women were central to the Minutemen. Women mobilized support and took part in border missions. These women compel us to look beyond ideological commitments and material benefits in seeking to understand the appeal of right-wing politics. Johnson argues that the women of the Minutemen were motivated in part by the gendered experience of aging in America. In a society that makes old women irrelevant, aging white women found their place through anti-immigrant activism, which wedded native politics to their concern for the safety of their families. Grandmothers on Guard emphasizes another side of nationalism: the yearning for inclusion. The nation the Minutemen imagined was not only a space of exclusion but also one in which these women could belong.