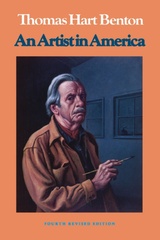 Controversial, flamboyant, contentious, brilliant--Thomas Hart Benton (1889-1975) was certainly all of those. Few American artists have stirred so much love and hatred as he did in a career that lasted almost seventy years. Although his painting aroused much controversy, perhaps equally as much was created by his words, for his piercing wit, profane sarcasms, and insightful condemnations were fired off without restraint. In this fiery and provocative autobiography, Benton presents an intriguing records of American art and society during his lifetime.

The first installment of this work was published in 1937, but Benton continued his life story in chapters added to editions published in 1951 and 1968. This new edition includes seventy-six drawings that add much to his narrative, plus a foreword discussing Benton's place in American art and an afterword covering his career after 1968, both written by art historian Matthew Baigell.

Although Benton is most famous as a regionalist painter and muralist, his complex and fascinating career brought him into contact with many of the most important artists and thinkers of the century, including Jackson Pollock, Grant Wood, Julian Huxley, Felix Frankfurter, Eugene Debbs, John Reed, and Harry Truman. While living in New York and on Martha's Vineyard in the 1920s and 1930s, Benton often associated with leading intellectuals and radicals. However, when his evolving principles of art led him away from an interest in Marxism, he was bitterly attacked by many of his former friends, and his account of that time reveals strikingly the fierce critical battles he faced in trying to establish his own artistic vision.

Critics on the Left were not his only opponents, however, and equally revealing are his responses to the moral condemnations heaped on his murals done for the states of Indiana and Missouri and on his realistic nudes of the late 1930s.

Throughout his account, from descriptions of his boyhood in southwest Missouri, his travels, and his career to discussions of specific works of art and other artists, Benton portrays people and events as vividly in words as he does in his paintings. 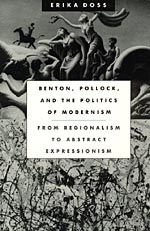 Benton, Pollock, and the Politics of Modernism
From Regionalism to Abstract Expressionism
Erika Doss
University of Chicago Press, 1991
In this acclaimed revisionist study, Erika Doss chronicles an historic cultural change in American art from the dominance of regionalism in the 1930s to abstract expressionism in the 1940s. She centers her study on Thomas Hart Benton and Jackson Pollock, Benton's foremost student in the early thirties, charting Pollock's early imitation of Benton's style before his radical move to abstraction. By situating painting within the evolving sociopolitical and cultural context of the Depression and the Cold War, Doss explains the reasons for this change and casts light on its significance for contemporary culture.

"A welcome addition to the growing body of literature that deals with the art and culture of the depression and cold war eras. It is a pioneering work that makes a valuable contribution to our understanding of a puzzling conundrum of American art—the shift from regionalism to abstract expressionism."—M. Sue Kendall, Winterthur Portfolio

"An important scholarly contribution. . . . This book will stand as a step along the way to a better understanding of the most amazing transition in the art of our tumultuous century."—James G. Rogers, Jr., Art Journal

"A valuable and interesting book that restores continuity and political context to the decades of depression and war."—Marlene Park, American Historical Review
[more]