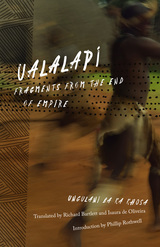 Ungulani Ba Ka Khosa first published Ualalapi: Fragments from the End of Empire in Portuguese in 1987. Named one of Africa's hundred best books of the twentieth century, it reflects on Mozambique's past and present through interconnected narratives related to the last ruler of the Gaza Empire, Ngungunhane. Defeated by the Portuguese in 1895, Ngungunhane was reclaimed for propaganda purposes by Mozambique's post-independence government as a national and nationalist hero. The regime celebrated his resistance to the colonial occupation of southern Mozambique as a precursor to the twentieth-century struggle for independence. In Ualalapi, Ungulani challenges that ideological celebration and portrays Ngungunhane as a despot, highlighting the violence and tyranny that were hallmarks of the Gaza Empire. This fresh look at the history of late nineteenth-century southeast Africa provides a prism through which to examine the machinations of those in power in Mozambique during the 1980s.
AUTHOR BIOGRAPHY
UNGULANI BA KA KHOSA (b. 1957) is Director of Mozambique's Instituto Nacional do Livro e do Disco. He is the author of several books, including Choriro and Entre as Memórias Silenciadas. RICHARD BARTLETT and ISAURA DE OLIVEIRA have translated a number of books from the Portuguese, including Lília Momplé's Neighbours: The Story of a Murder. PHILLIP ROTHWELL is King John II Professor of Portuguese at the University of Oxford and the author of A Canon of Empty Fathers: Paternity in Portuguese Narrative and A Postmodern Nationalist: Truth, Orality and Gender in the Work of Mia Couto.
REVIEWS
"An English translation of this undisputed masterpiece of modern Mozambican fiction comes very welcome indeed. Both the translation and the foreword provide the Anglophone reader with an excellent introduction to the work of Ungulani Ba Ka Khosa, offering a compelling historical vision of peoples and cultures in the crucible of conflict."—Hilary Owen, University of Oxford/University of Manchester

"Ualalapi endures as one of the most compelling historical novels produced in post-independence Mozambique. . . . Khosa's narrative exudes a foreboding and multifarious end-of-the-world mood."—Luís Madureira, University of Wisconsin-Madison