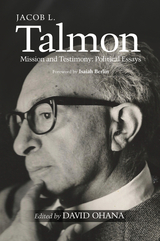 Isaiah Berlin, in his "Tribute to a Friend", wrote about the historian Jacob L. Talmon (1916-1980): "No matter what his theoretical interests were, or the topics on which he was lecturing or writing, his deepest concern was with the Jewish people, its history, its religious, moral and social values, its place among the nations, its future in Israel and the diaspora." These words capture the essence of Talmon's political essays presented in Mission and Testimony. Talmon was chosen by an international committee of scholars as one of the twenty major historians of the twentieth century, declaring that "his historiography was a convincing apologia for human freedom." He owes his fame primarily to his magnum opus, the trilogy that began with The Origins of Totalitarian Democracy (1952), continued with Political Messianism (1960) and concluded with The Myth of the Nation and the Vision of Revolution (1981). This edited collection of Talmon's essays comprises the following: Part I, "The Nature of Jewish history", deals with the Jewish presence in history, the universal significance of Jewish history, and the impact of Jewish intellectuals. Part II, "From Anti-Semitism to the Holocaust", concerns the anti-Semitic climate of opinion that led to the Holocaust. Part III depicts the regional and global situation of the State of Israel. In Part IV, "Intellectual and Political Debates", Talmon confronts intellectuals and statesmen such as Arnold Toynbee and Menachem Begin. Part V, "Profiles in History", depicts the intellectual portraits of the historian Lewis Namier and the physicist and champion of human rights Andrei Sakharov.