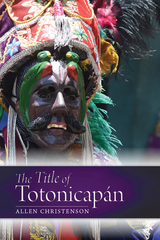 This work is the first English translation of the complete text of the Title of Totonicapán, one of the most important documents composed by the K’iche’ Maya in the highlands of Guatemala, second only to the Popol Vuh. The original document was completed in 1554, only a few decades after the Spanish Conquest of the K’iche’ people in 1524. This volume contains a wholly new translation from the original K’iche’ Maya text, based on the oldest known manuscript copy, rediscovered by Robert Carmack in 1973.

The Title of Totonicapán is a land title written by surviving members of the K’iche’ Maya nobility, a branch of the Maya that dominated the highlands of western Guatemala prior to the Spanish invasion in 1524, and it was duly signed by the ruling lords of all three major K’iche’ lineages—the Kaweqib’, the Nijayib’, and the Ajaw K’iche’s. Titles of this kind were relatively common for Maya communities in the Guatemalan highlands in the first century after the Spanish Conquest as a means of asserting land rights and privileges for its leaders. Like the Popol Vuh, the Title of Totonicapán is written in the elevated court language of the early Colonial period and eloquently describes the mythic origins and history of the K’iche’ people. For the most part, the Title of Totonicapán agrees with the Popol Vuh’s version of K’iche’ history and cosmology, providing a complementary account that attests traditions that must have been widely known and understood. But in many instances the Totonicapán document is richer in detail and departs from the Popol Vuh’s more cursory description of history, genealogy, and political organization. In other instances, it contradicts assertions made by the authors of the Popol Vuh, perhaps a reflection of internal dissent and jealousy between rival lineages within the K’iche’ hierarchy. It also contains significant passages of cosmology and history that do not appear in any other highland Maya text.

This volume makes a comprehensive and updated edition of the Title of Totonicapán accessible to scholars and students in history, anthropology, archaeology, and religious studies in Latin America, as well as those interested in Indigenous literature and Native American/Indigenous studies more broadly. It is also a stand-alone work of Indigenous literature that provides additional K’iche’ perspectives, enhancing the reading of other colonial Maya sources.
AUTHOR BIOGRAPHY
Allen J. Christenson is professor of Precolumbian studies at Brigham Young University and the author of Art and Society in a Highland Maya Community, a two-volume critical edition of the Popol Vuh, and The Burden of the Ancients and coeditor of The Myths of the Popol Vuh in Cosmology, Art, and Ritual.

REVIEWS
“This book—a long-overdue critical translation into English of a significant, under-studied primary resource—will make a substantial contribution to the study of Indigenous Mesoamerica and become a key resource for scholars, students, and interested readers.”
—Mallory Matsumoto, The University of Texas at Austin