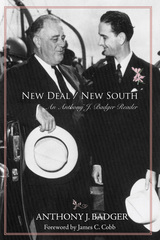 The twelve essays in this book, several published here for the first time, represent some of Tony Badger’s best work in his ongoing examination of how white liberal southern politicians who came to prominence in the New Deal and World War II handled the race issue when it became central to politics in the 1950s and 1960s. Franklin Roosevelt in the 1930s thought a new generation of southerners would wrestle Congress back from the conservatives. The Supreme Court thought that responsible southern leaders would lead their communities to general school desegregation after the Brown decision. John F. Kennedy believed that moderate southern leaders would, with government support, facilitate peaceful racial change. Badger’s writings demonstrate how all of these hopes were misplaced. Badger shows time and time again that moderates did not control southern politics. Southern liberal politicians for the most part were paralyzed by their fear that ordinary southerners were all-too-aroused by the threat of integration and were reluctant to offer a coherent alternative to the conservative strategy of resistance.
AUTHOR BIOGRAPHY
Anthony J. Badger is Paul Mellon Professor of American History at Cambridge University and Master of Clare College. He is the author of a number of books, including North Carolina and the New Deal; The New Deal: The Depression Years, 1933–1940; The Making of Martin Luther King and the Civil Rights Movement (with Brian Ward); and Contesting Democracy (with Byron Shafer).
REVIEWS
”This book promises to inform and enlighten in a multitude of ways, not the least of them being the insights it offers into the progression of an exceptionally talented historian’s interests and awareness as Tony shares his professional and personal odyssey from New Deal historian to southern historian.” —from the foreword by James C. Cobb