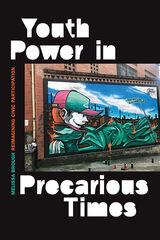 Does youth participation hold the potential to change entrenched systems of power and to reshape civic life? In Youth Power in Precarious Times Melissa Brough examines how the city of Medellín, Colombia, offers a model of civic transformation forged in the wake of violence and repression. She responds to a pressing contradiction in the world at large, where youth political participation has become a means of commodifying digital culture amid the ongoing disenfranchisement of youth globally. Brough focuses on how young people's civic participation online and in the streets in Medellín was central to the city's transformation from having the world's highest homicide rates in the early 1990s to being known for its urban renaissance by the 2010s. Seeking to distinguish commercialized digital interactions from genuine political participation, Brough uses Medellín's experiences with youth participation—ranging from digital citizenship initiatives to the voices of community media to the beats of hip-hop culture—to show how young people can be at the forefront of fostering ecologies of artistic and grassroots engagement in order to reshape civic life.
AUTHOR BIOGRAPHY
Melissa Brough is Assistant Professor of Communication Studies at California State University, Northridge.
REVIEWS
“In few world cities do creative vision and the long shadow of brutal institutionalized violence intersect more powerfully than in Medellín, Colombia. What would it mean to respond to that city's challenges using ‘participation’ as the guiding principle? Melissa Brough's rich and clear-sighted study of local participation within citizens' media, participatory budgeting, hip-hop collectives, and urban policy making is a major advance in our understanding of Latin America's distinctive path back towards democracy.”


Acknowledgments  ix
Introduction  1
1. From Participation to Polycultural Civics  16
2. Digitizing the Tools of Engagement  59
3. "We Think about the City Differently"  99
4. "Medellín, Governable and Participatory 145
5. Polycultural Civics in the Digital Age  189
Notes  234
Bibliography  276
Index  312