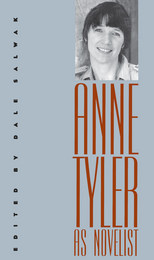 Over the past thirty years, Anne Tyler has earned a National Book Critics Circle Award, a Pulitzer Prize, and the admiration of an ever-expanding number of devoted readers. The seventeen essays that compose Anne Tyler as Novelist concentrate upon the distinctive features of Tyler's writing: her steady concern with the American family, the quietly comic touch that underlies her unobtrusive but perfectly controlled style, her prodigious gift for bringing to life a variety of eccentric characters, their fears and concerns, their longing for meaning and understanding. Consistently, Anne Tyler's work focuses on ordinary families with extraordinary troubles—therein part of the secret of her broad appeal.
Written from a variety of critical approaches and representing some of the best among today's critics, the essays in this book discuss Tyler's early years and influences, her development and beliefs, attainments, and literary reputation, stretching from her first published novel, If Morning Ever Comes, to her twelfth, Saint Maybe. From Elizabeth Evans' interviews with Tyler's mother and former teachers to John Updike's lucid assessments, Anne Tyler as Novelist is a major contribution to the growing dialogue on this most important writer. All but two essays were written especially for this volume.
This book will obviously hold great appeal for the many people who have already encountered the pleasures of Tyler's novels. Less obviously, it is also for the people who have heard of her but have not read her works; those people should be inspired to turn with particular insight to the novels of Anne Tyler. In a 1983 review of Barbara Pym's novel No Fond Return of Love, Anne Tyler said of Pym that she was “the rarest of treasures.” Certainly we may say the same of Tyler herself—and for reasons given in this fine collection of essays that pays tribute to one of America's most accomplished writers.
AUTHOR BIOGRAPHY
Dale Salwak is a professor of English at southern California's Citrus College and a recipient of Purdue University's Distinguished Alumni Award as well as a National Defense Education Act fellowship from the University of Southern California where he earned his Ph.D. He is the author of numerous books, including Kingsley Amis: Modern Novelist and Carl Sandburg: A Reference Guide, and the editor of The Wonders of Solitude, Anne Tyler as Novelist (Iowa, 1994), Philip Larkin: The Man and His Work (Iowa, 1989), and The Life and Work of Barbara Pym (Iowa, 1987).
REVIEWS
“This is a superb and timely tribute to the author of one of my favorite American novels,Dinner at the Homesick Restaurant. Anne Tyler must be among our greatest living writers. It is good to see the critics catching up with her work.”—John Halperin