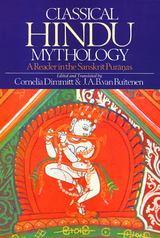 The book is organized into six chapters. "Origins" contains myths relating to creation, time, and space. "Seers, Kings and Supernaturals" relates tales of rivers, trees, animals, demons, and men, particularly heroes and sages. Myths about the chief gods are dealt with in three separate chapters: "Krsna," "Visnu," and "Siva." The chapter "The Goddess" presents stories of the wives and lovers of the gods, as well as of Kali, the savage battle goddess.

In their introductions, the editors provide a historical setting in which to discuss Hindu mythology as well as a full analysis of its basic sources. The many names given the gods and goddesses in the Sanskrit texts have been retained since their multiplicity is an essential part of the richness of the original. The editors have provided a thorough glossary to make these names accessible.

Cornelia Dimmitt is Assistant Professor of Theology at Georgetown University and a Core Faculty Member of the Washington, D.C. Consortium Program in History of Religions.

J. A. B. van Buitenen is Distinguished Service Professor of Sanskrit at the University of Chicago. He is currently translating the full Mahabharata, projected to run eight volumes.

"[P]rovides an important segment of world literature that has been virtually inaccessible."
—Choice