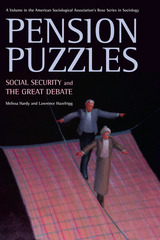 The rancorous debate over the future of Social Security reached a fever pitch in 2005 when President Bush unsuccessfully proposed a plan for private retirement accounts. Although efforts to reform Social Security seem to have reached an impasse, the long-term problem—the projected Social Security deficit—remains. In Pension Puzzles, sociologists Melissa Hardy and Lawrence Hazelrigg explain for a general audience the fiscal challenges facing Social Security and explore the larger political context of the Social Security debate. Pension Puzzles cuts through the sloganeering of politicians in both parties, presenting Social Security's technical problems evenhandedly and showing how the Social Security debate is one piece of a larger political struggle. Hardy and Hazelrigg strip away the ideological baggage to explicate the basic terms and concepts needed to understand the predicament of Social Security. They compare the cases for privatizing Social Security and for preserving the program in its current form with adjustments to taxes and benefits, and they examine the different economic projections assumed by proponents of each approach. In pursuit of its privatization agenda, Hardy and Hazelrigg argue, the Bush administration has misled the public on an issue that was already widely misunderstood. The authors show how privatization proponents have relied on dubious assumptions about future rates of return to stock market investments and about the average citizen's ability to make informed investment decisions. In addition, the administration has painted the real but manageable shortfalls in Social Security revenue as a fiscal crisis. Projections of Social Security revenues and benefits by the Social Security Administration have treated revenues as fixed, when in fact they are determined by choices made by Congress. Ultimately, as Hardy and Hazelrigg point out, the clash over Social Security is about more than technical fiscal issues: it is part of the larger culture wars and the ideological struggle over what kind of social responsibilities and rights American citizens should have. This rancorous partisan wrangling, the alarmist talk about a "crisis" in Social Security, and the outright deception employed in this debate have all undermined the trust between citizens and government that is needed to restore the solvency of Social Security for future generations of retirees. Drawing together economic analyses, public opinion data, and historical narratives, Pension Puzzles is a lucid and engaging guide to the major proposals for Social Security reform. It is also an insightful exploration of what that debate reveals about American political culture in the twenty-first century. A Volume in the American Sociological Association's Rose Series in Sociology
AUTHOR BIOGRAPHY
MELISSA HARDY is Distinguished Professor of Human Development and Family Studies in Sociology and Demography and director of the Gerontology Center at the Pennsylvania State University. LAWRENCE HAZELRIGG is professor emeritus at Florida State University and adjunct professor of sociology at the Pennsylvania State University.
TABLE OF CONTENTS