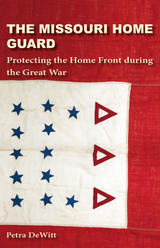 Missouri was one of many states that established a defense organization to take over the duties of the National Guard that had been federalized for military service when the United States declared war on Germany in 1917. The tasks of this volunteer Home Guard included traditional National Guard responsibilities such as providing introductory military training for draftable men, protecting crucial infrastructure from potential enemy activities, and maintaining law and order during labor activism.

The Home Guard also functioned to preserve patriotism and reduce opposition to the war. Service in the Guard was a way to show loyalty to one’s country, particularly for German Americans, who were frequently under suspicion as untrustworthy. Many German Americans in Missouri enthusiastically signed up to dispel any whispers of treason, while others found themselves torn between the motherland and their new homeland. Men too old or exempt from the draft for other reasons found meaning in helping with the war effort through the Home Guard while also garnering respect from the community. For similar reasons, women attempted to join the organization as did African Americans, some of whom formed units of a “Negro Home Guard.” Informed by the dynamics of race, gender, and ethnicity, DeWitt’s consideration of this understudied but important organization examines the fluctuating definition of patriotism and the very real question of who did and who did not have the privilege of citizenship and acceptance in society.
AUTHOR BIOGRAPHY
Petra DeWitt is Associate Professor of History and Political Science at the Missouri University of Science and Technology. DeWitt specializes in migration and ethnic history and has published several articles and encyclopedia submissions on those subjects. She is the author of Degrees of Allegiance: Harassment and Loyalty in Missouri’s German-American Community during World War I, which won the State Historical Society of Missouri’s Missouri Book Award in 2012.
REVIEWS
“Petra DeWitt, using an impressive array of primary sources, has written an exquisite and engaging account of how and why Missouri men and women joined and supported Missouri’s Home Guard during World War I.   Furthermore, she evaluates the organization and accomplishments of the Missouri Home Guard within the historical context of the development of other state Home Guards across the nation.”—Jon Taylor, University of Central Missouri, author of A President, A Church, and Trails West:  Competing Histories in Independence, Missouri


“Historians of America’s wars have repeatedly called for local studies that would help to give a more nuanced understanding of the different ways Americans experienced the nation’s wars. DeWitt’s [work] on the Missouri Home Guard offers much potential to expand our knowledge of the home front during World War I.”—Lynn Dumenil, Occidental College, author of The Second Line of Defense: American Women and World War I


“The Missouri Home Guard is much more than a standard organizational history. In DeWitt’s deft hands, this study of Missouri citizens’ response to World War I becomes a lens through which to examine the larger political, social, and cultural forces that shaped early twentieth-century US and Missouri history. Diverse Missourians—businessmen, workers, African Americans, German Americans, and women—all believed that public displays of their patriotism through service in the Home Guard demonstrated their loyalty to the US while at the same time promoted their personal interests as they worked toward a brighter future."—Diane Mutti Burke, University of Missouri, Kansas City, author of On Slavery’s Border: Missouri’s Small-Slaveholding Households, 1815-1865