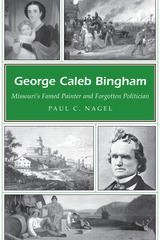 In this fascinating work, Paul Nagel tells the full story of George Caleb Bingham (1811–1879), one of America’s greatest nineteenth-century painters. While Nagel assesses Bingham’s artistic achievements, he also portrays another very important part of the artist’s career—his service as a statesman and political leader in Missouri. Until now, Bingham’s public service has been largely forgotten, overshadowed by his triumph as a great artist. Yet Nagel finds there were times when Bingham yearned more to be a successful politician than to be a distinguished painter.
Born in Virginia, Bingham moved with his family to Missouri when he was eight years old. He spent his youth in Arrow Rock, Missouri, and returned there as an adult. He also kept art studios in Columbia and St. Louis. In his last years, he served as the first professor of art at the University of Missouri in Columbia. Because of his ties to the state, he was known nationally as “the Missouri artist.” Bingham began his distinguished public service to Missouri as a member of the legislature. During the Civil War, he grew even more politically involved, holding the office of state treasurer, and he remained active throughout the period of Reconstruction. From 1875 to 1877, Bingham served as Missouri’s adjutant general, with most of that time spent in Washington, D. C., where he attempted to settle Missourians’ war claims against the federal government.
Contrary to the idyllic scenes portrayed in most of his paintings, Bingham’s life ranged from moments of high achievement to times of intense distress and humiliation. His career was often touched by controversy, sorrow, and frustration. Personal letters and other manuscripts reveal Bingham’s life to be quite complicated, and Paul Nagel attempts to uncover the truth in this biography.
Beautifully illustrated, this book includes a magnificent landscape entitled Horse Thief, which had been missing since Bingham painted it sometime around 1852. Recently discovered by art historian Fred R. Kline, this splendid work will appear in print for the first time. Anyone who has an interest in art, Missouri history, or politics will find this new book extremely valuable.
AUTHOR BIOGRAPHY
Paul Nagel, a native Missourian, was formerly a professor of history, a college dean, and a university vice president. He is the author of numerous books, several of them prizewinners. He recently published John Quincy Adams: A Public Life, A Private Life and The Lees of Virginia: Seven Generations of an American Family, both of which were History Book Club Selections. He resides in Minneapolis, Minnesota.
TABLE OF CONTENTS