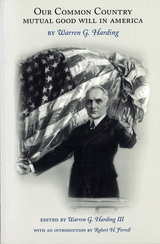 University of Missouri Press, 2003
Paper: 978-0-8262-1454-6
Our Common Country is a collection of informal addresses, eighteen in all, given by Warren G. Harding as president-elect that defined his vision for the United States. What makes these addresses as relevant today as they were in 1921 is the unsettled mood of the country. Even though World War I is now a distant memory, today’s Americans have suffered through similar conflicts.
In 1917 when Americans went off to war, the red, white, and blue flew everywhere. Two million American soldiers went to France and fifty thousand of them died; the battle of the Meuse-Argonne was one of the costliest in American history. With the announcement by America’s allies that the United States’s contributions to the war were insignificant compared to their own, President Wilson’s leadership began to collapse. Also, the domestic economy’s boom was turning to a bust and the national debt was expanding. The general consensus of Americans was that “things had gone to hell in a handbasket.”
In an effort to ease the minds of troubled and confused Americans, President Harding tried to provide them with inspiration. Addressing different groups of the population—mothers, veterans, patriots, farmers, businessmen, the press—he sought to send a consistent personal message of reassurance. During his administration, he would bring a formal end to the war by signing the Treaty of Berlin and would limit strategic armaments through the treaties of the Washington Conference. He would also establish the Bureau of the Budget, thereby bringing order to the departmental and bureaucratic requests that had disgraced budget making for decades. He planted the seeds for a department of health, education, and welfare, which was finally realized thirty years later. Although the former president was much maligned after his death, his good works during his term of office speak for themselves and show concern for his fellow Americans. His warmth, strength of character, and intelligence are demonstrated throughout these addresses. Harding spoke to his own time, yet these addresses speak to our own confusing times as well.
AUTHOR BIOGRAPHY
Warren G. Harding III is the great-nephew of President Warren G. Harding and a practicing physician in Cincinnati, Ohio.