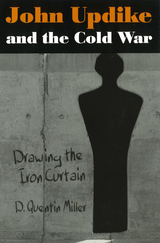 One of the most enduring and prolific American authors of the latter half of the twentieth century, John Updike has long been recognized by critics for his importance as a social commentator. Yet, John Updike and the Cold War is the first work to examine how Updike's views grew out of the defining context of American culture in his time—the Cold War. Quentin Miller argues that because Updike's career began as the Cold War was taking shape in the mid-1950s, the world he creates in his entire literary oeuvre—fiction, poetry, and nonfiction prose—reflects the optimism and the anxiety of that decade.

Miller asserts that Updike's frequent use of Cold War tension as a metaphor for domestic life and as a cultural reality that affects the psychological security of his characters reveals the inherent conflict of his fictional world. Consequently, this conflict helps explain some of the problematic relationships and aimless behavior of Updike's characters, as well as their struggles to attain spiritual meaning.

By examining Updike's entire career in light of the historical events that coincide with it, Miller shows how important the early Cold War mind-set was to Updike's thinking and to the development of his fiction. The changes in Updike's writing after the 1950s confirm the early Cold War era's influence on his ideology and on his celebrated style. By the Cold War's end in the late 1980s, Updike's characters look back fondly to the Eisenhower years, when their national identity seemed so easy to define in contrast to the Soviet Union. This nostalgia begins as early as his writings in the 1960s, when the breakdown of an American consensus disillusions Updike's characters and leaves them yearning for the less divisive 1950s.

While underscoring how essential history is to the study of literature, Miller demonstrates that Updike's writing relies considerably on the growth of the global conflict that defined his time. Cogent and highly readable, John Updike and the Cold War makes an important contribution to Updike scholarship.

D. Quentin Miller is Assistant Professor of English at Suffolk University in Boston and editor of Re-Viewing James Baldwin: Things Not Seen.