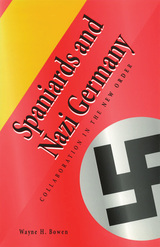 Using recently declassified documents from Spain and the United States, personal interviews, and unpublished and published Spanish, German, British, and U.S. records, Spaniards and Nazi Germany makes a significant contribution to the understanding of Hispano-German relations during the 1930s and 1940s. This study shows that Naziphiles within the Spanish Falange, Spain's fascist party, made a concerted effort to bring their nation into World War II, and that only the indecisiveness of dictator Francisco Franco and diplomatic mistakes by the Nazis prevented them from succeeding.

Bowen demonstrates that while Spain was neutral in World War II, its policies clearly favored the Axis, at least in the early stages of the war. Franco, who had emerged victorious from the Spanish Civil War in 1939 largely because of support from Adolf Hitler and Benito Mussolini, even carefully considered entering World War II on the side of Nazi Germany.

By the late 1930s, members of the Falange saw World War II as a revolutionary opportunity, a chance to lead Spain into a new age as a partner with Nazi Germany and Fascist Italy at the head of a New Europe of social justice and authoritarian regimes. By the end of 1939, a significant minority of pro- Nazi Spaniards were unhappy that Spain had not entered the war and remade itself to fit better into Hitler's New Order. Bowen argues that support for Nazi Germany in Spain and among Spanish communities throughout Europe was both wide and deep, and that this enthusiasm for the Third Reich and the New Order it promised to bring lasted until the end of the war. Despite statements of neutrality by the Spanish government, the Franco regime was well aware of this collaboration by Spanish citizens as late as 1944-1945 and did little to stop it. Had Hitler been more interested in bringing Spain into his empire, or exploiting the pro-Nazi sentiments of these thousands of Spaniards, he might have replaced Franco with someone more willing to support his interests even as late as 1943.

Spaniards and Nazi Germany presents many possibilities for what might have been a far different outcome of World War II in Europe. It shows that even without the full support of the Spanish or German governments, pro-Nazi Spaniards, even if they did not quite bring Spain into the war, added to the strength of the Third Reich by serving in its armies, working in its factories, and promoting its ideas to other nations.