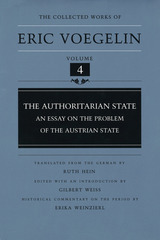 The Authoritarian State (CW4): An Essay on the Problem of the Austrian State
by Eric Voegelin
edited by Gilbert Weiss
translated by Ruth Hein
commentaries by Erika Weinzierl and Erika Weinzierl

Published in Vienna in 1936, The Authoritarian State by Eric Voegelin has remained virtually unknown to the public until now. Sales of the German edition were halted following the Nazi invasion of Austria in 1938, and the entire printing was later destroyed by wartime bombing. In this volume, Voegelin offers a critical examination of the most prominent European theories of state and constitutional law of the period while providing a political and historical analysis of the Austrian situation. He discusses the dismissal of Parliament in 1933, the civil war, the murder of Federal Chancellor Dollfuss, the adoption of the "Authoritarian Constitution" of 1934, and the predicament of being sandwiched between Hitler and Mussolini.

A radical critique of Hans Kelsen's pure theory of law lies at the heart of this work, marking Voegelin's definitive departure from Neo-Kantian epistemology. For the first time, Voegelin elaborates on the important distinction between theoretical concepts and political symbols as a basis for explaining the nontheoretical and speculative character of ideologies, both left and right. He shows that total and authoritarian are symbols of ideological self-interpretation that have no theoretical value, a distinction basic to his later work in The New Science of Politics.

Available for the first time in English, The Authoritarian State is a valuable addition to the Voegelin canon and to the field of intellectual history in general.

AUTHOR BIOGRAPHY
About the Author

Eric Voegelin (1901-1985) was one of the most original and influential philosophers of our time. Born in Cologne, Germany, he studied at the University of Vienna, where he became a professor of political science in the Faculty of Law. In 1938, he and his wife, fleeing Hitler, emigrated to the United States. They became American citizens in 1944. Voegelin spent much of his career at Louisiana State University, the University of Munich, and the Hoover Institution at Stanford University. During his lifetime he published many books and more than one hundred articles. The Collected Works of Eric Voegelin will make available in a uniform edition all of Voegelin's major writings.