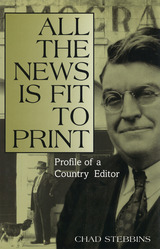 For nearly half a century, Arthur Aull captivated a rural Missouri town and a national audience with his sensationalistic, all-the- news-is-fit-to-print approach to journalism. As editor and publisher of the Lamar Democrat from 1900 to 1948, he disregarded most of the traditional rules of news coverage. Every scandal and piece of gossip he could turn up helped fill the pages of his newspaper, an afternoon daily in a town of about 2,300. His tales of grisly accidents, murders, rapes, juvenile crime, suicides, and sensational divorces reminded skeptics of the earlier yellow journalism era.

Aull embellished nearly all of his stories with a personal, homespun flavor, and that's what caught the attention of syndicated columnists O. O. McIntyre and Ted Cook in the late 1920s. They started sprinkling their columns with curious items from the Democrat, and soon after unusual stories from the paper began showing up in the New York Times, the New York World-Telegram, the New Yorker, and even the Journal of the American Medical Association. Feature stories about Aull appeared in Publishers' Auxiliary, the Chicago Daily News, Life, Time, Newsweek, American Magazine, and Harper's. Aull became known coast to coast as one of the most colorful figures in country journalism, and the Democrat attracted subscribers in all forty-eight states plus Canada and England. Even President Truman, who was born in Lamar, noted Aull's death on May 7, 1948, declaring that an "able and picturesque figure in American journalism has passed on."

Despite the national acclaim, Aull remained an unpretentious small- town editor. He had his own code of ethics, which he refused to modify to reflect the changing times. He was sued for libel three times, assaulted with a club, threatened with other kinds of bodily harm, and cursed by many. Yet, he persisted in scouring the town of Lamar for any news that would help him sell a few more copies of the Democrat.

Although the influence of country journalism on American society cannot be disputed, relatively little has been written on the vital role country journalists play. All the News Is Fit to Print, which traces Aull's transformation from a struggling schoolteacher to one of the best-known small-town newspapermen in America, will help remedy that oversight. Anyone with an interest in the history of journalism or small-town life will find this work fascinating.