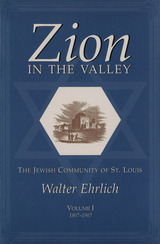 St. Louis contains one of the largest Jewish communities in the interior of the United States. Yet, despite the important contributions of St. Louis Jews to the city's cultural and economic growth and to national and international Jewry, no history of their accomplishments has heretofore been written.

In this masterful book, Walter Ehrlich shows how the St. Louis Jewish community grew in two separate yet intricately related milieux. One was the internal socioreligious community, which centered on relations of Jews with fellow Jews. The other was the broader secular environment, in which Jews individually and collectively interacted with the non-Jewish population, assuming significant roles in the political, economic, social, and religious developments of one of the country's most important urban centers.

Employing many previously unused primary materials--especially congregational archives, organizational and business records, contemporary newspapers, and vivid personal memoirs--Ehrlich presents a fascinating description of how individuals and groups contributed to the growth and development of a major American urban area. He clarifies significant aspects of social and economic structure, mobility, and philanthropy within the Jewish community and integrates them within the broader framework of American society. In the process, Ehrlich provides a unique perspective on St. Louis history, as well as on American urban, ethnic, and immigration history.

Zion in the Valley is an invaluable contribution to the field of Jewish studies. It will appeal to scholars and students of Jewish, urban, and ethnic history, as well as to members of the broader St. Louis community.

Walter Ehrlich is Professor Emeritus of History at the University of Missouri-St. Louis. He is the author of They Have No Rights: Dred Scott's Struggle for Freedom, Presidential Impeachment: An American Dilemma, and We the People: Two Hundred Years of the Constitution.

Walter Ehrlich "has written the comprehensive history of the Jews of St. Louis. . . . This is a good book and an important book. It will be consulted by researchers as long as a copy exists. It is a treasure trove for those wanting to know about a specific synagogue, charitable organization, or community leader."--American Historical Review


"Zion in the Valley is elegantly written, and Ehrlich locates the story of St. Louis Jewry within the larger context of American and American Jewish history. . . . An excellent historical portrayal of a Midwestern Jewish community and makes a valuable contribution to the historiography of the urban American Jewish experience."--Journal of American History


"This book contains rich anecdotal information on a century of Jewish life in a city that served as the gateway to the West. Many of the events typify life in other large cities; tensions between traditionalists and Reformers with respect to theological and communal issues and generational and ethnic differences."--Jewish Book World