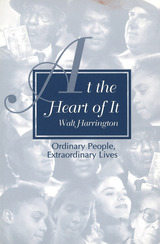 Delving into the everyday lives of real, everyday people, Walt Harrington skillfully draws the reader into an intimate relationship with the men and women profiled in this powerful collection of stories--people like V. I. Smith, a homicide detective; Deane Guy, a stock car racer; Jackie Jordan, a social worker in family services; and Sheri D'Amato, a girls' soccer coach.

Originally appearing in the Washington Post Magazine, these stories, which capture a cross section of Americans, stand out in the field of journalism because of the unique way in which Walt Harrington uses unheralded, individual lives to elaborate on the great human issues of the day. In "Mothers and Daughters" three generations of women discuss how society affected the choices they made and who they became. "The Mystery of Goodness" follows a Harvard-educated lawyer who handles death-row cases for very little money because he feels the system is unfair to African Americans. In "To Have and Have Not" a young couple with two small children struggle to make ends meet. Harrington describes in detail the creation of a poem by Rita Dove, then United States Poet Laureate, in "The Shape of Her Dreaming."

Harrington has adeptly combined sociology and journalism into beautiful prose. As "literary journalism," the stories employ scene, dialogue, and physical description within a narrative framework. At the same time, they also adhere to all the traditional journalistic standards of accuracy, fairness, and balance. As a result, At the Heart of It represents a subgenre that is rarely practiced and seldom understood even within the profession of journalism.

All of these stories are snapshots, pieces of everyday life in America that are intended to be a mirror held to the lives of readers. These are not stories about which you can remain neutral; even the most casual readers will be moved by the glimpses Walt Harrington provides us of ourselves.

For more than a decade, Walt Harrington was an award-winning writer at the Washington Post Magazine. He is currently Professor of Journalism at the University of Illinois at Urbana-Champaign. He is the author of Crossings: A White Man's Journey into Black America, and American Profiles: Somebodies and Nobodies Who Matter.

"What's extraordinary about these people isn't so much their lives as the way Harrington profiles them. . . . It is Harrington's gift as a writer that makes their stories equally compelling and unforgettable."--Publishers Weekly, starred review


"In contrast to the popular image of the journalist as a marauding itinerant, Harrington settles in with his subjects. As a result he is often on hand at odd moments to capture critical exchanges, such as the conversation at a child's bedtime or the moment the zucchini boats leave the oven. He is that rare reporter who treats everyone he encounters with what appears to be infinite respect."--Madeleine Blais