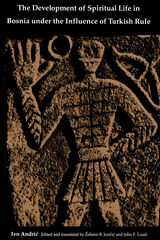 Ivo Andric (1892-1975), Nobel Prize laureate for literature in 1961, is undoubtedly the most popular of all contemporary Yugoslav writers. Over the span of fifty-two years some 267 of his works have been published in thirty-three languages. Andric’s doctoral dissertation, The Development of Spiritual Life in Bosnia under the Influence of Turkish Rule (1924), never before translated into English, sheds important light on the author’s literary writings and must be taken into account in any current critical analysis of his work.
Over his long and distinguished career as a diplomat and man of letters Andric never again so directly or discursively addressed, as a social historian, the impact of Turkish hegemony on the Bosnian people (1463–1878), a theme he returns to again and again in his novels. Although Andric’s fiction was embedded in history, scholars know very little of his actual readings in history and have no other comparable treatment of it from his own pen. This dissertation abounds with topics that Andric incorporated into his early stories and later novels, including a focus on the moral stresses and compromises within Bosnia’s four religious confessions: Catholic, Orthodox, Jew, and Muslim.
Z. B. Juricic provides an extensive introduction describing the circumstances under which this work was written and situating it in Andric’s oeuvre. John F. Loud’s original bibliography drawn from this dissertation stands as the only comprehensive inventory of historical sources known to have been closely familiar to the author at this early stage in his development.
TABLE OF CONTENTS