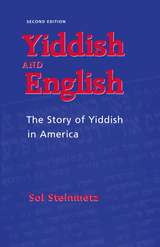 This is the only book to seriously treat the intriguing linguistic and cultural phenomenon of the intimate contact between Yiddish and English over the past 120 years.

Yiddish arrived in America as the mother tongue of millions of Jewish immigrants from eastern Europe. Not only did this language without a homeland survive in the great American melting pot, it infiltrated the majority language, English, with a wide variety of new words and expressions and helped to establish a new ethnic language called "Jewish English." New Yorkers, in particular, have adopted a long list of Yiddish words, including the well-known "kosher," "chutzpah," "klutz," "yenta," "nosh," "mavin," "schlep," and "shmo."

Yiddish had first developed from language sharing as Jews of northern France and northern Italy migrated into the German-speaking region of the Rhine Valley in the Middle Ages. Sol Steinmetz traces the development of such words as bonhomme from the Old French meaning "good man" to the Yiddish of bonim, or shul for synagogue derived from the German schuol, meaning "school," which had come originally from the Latin schola, for example. With a rich collection of quotations from literature and the press, Steinmetz documents the unusually high lexical, semantic, and intonational exchanges between Yiddish and English in America. He offers more than 1,200 Yiddish words, expressions, idioms, and phrases that have melted into the English vernacular.

Yiddish and English is important for Judaica collections with its two appendixes-one on the romanization of Yiddish and another of Yiddish-origin words, a Jewish-English glossary, a selected bibliography, and an index. But this slim volume is so entertaining and informative for the general reader that it is recommended for anyone who delights in word derivations and language.

REVIEWS
"A wonderfully readable book for both a general audience and immigrant historians."
— CHOICE


"This is a marvelous book . . . It is so enjoyable, so readable, so informative, so entertaining, and so well written that the reader is sorry when he comes to the last page."
—Verbatim