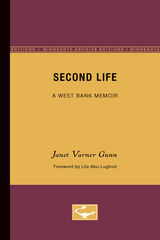 Second Life was first published in 1995.“Having sat out the U.S. civil rights movement and the Vietnam war protest during the sixties, I joined my first cause in the late eighties, a middle-aged academic on the other side of the world.” So writes Janet Varner Gunn, who from 1988 to 1990 took time out from university teaching to do human rights work on the West Bank. During that time she became involved with the case of Mohammad Abu Aker, a Palestinian teenager who was critically shot during a stone-throwing demonstration. The years following Mohammad’s injury, during which he was deemed a “living martyr” of the Intifada and which ended with his eventual death at nineteen in 1990, are recounted in this deeply personal book. Gunn interweaves her account of Mohammad’s medical struggles and the politics surrounding his symbolic place in the Intifada with her own story of loss and recovery. As a human rights worker for whom Mohammad initially represented a “case,” Gunn was involved in getting him the medical care he needed to survive. As a scholar, she became fascinated by the way Mohammad’s injury and subsequent “second life” took on a larger significance because of its timing, which coincided with the declaration of an independent Palestine. The book contains rich accounts of the “small news” of daily life in Deheishe, the refugee camp where Mohammad lived with his family. Gunn describes the laughter with which residents of the camp have learned to meet the violent disruption of their daily lives, hoping that her readers will “be moved not by the victimization of an oppressive occupation but by the examples of hope and steadfastness I discovered in Deheishe’s holding on for dear life.” Janet Varner Gunn has taught in the Department of English at Rhodes University, Grahamstown, South Africa, after completing a Senior Fulbright Lectureship. She is the author of Autobiography: Toward a Poetics of Experience (1982).