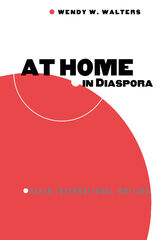 Although he never lived in Harlem, Chester Himes commented that he experienced “a sort of pure homesickness” while creating the Harlem-set detective novels from his self-imposed exile in Paris. Through writing, Himes constructed an imaginary home informed both by nostalgia for a community he never knew and a critique of the racism he left behind in the United States. Half a century later, Michelle Cliff wrote about her native Jamaica from the United States, articulating a positive Caribbean feminism that at the same time acknowledged Jamaica’s homophobia and color prejudice.

In At Home in Diaspora, Wendy Walters investigates the work of Himes, Cliff, and three other twentieth-century black international writers—Caryl Phillips, Simon Njami, and Richard Wright—who have lived in and written from countries they do not call home. Unlike other authors in exile, those of the African diaspora are doubly displaced, first by the discrimination they faced at home and again by their life abroad. Throughout, Walters suggests that in the absence of a recoverable land of origin, the idea of diaspora comes to represent a home that is not singular or exclusionary. In this way, writing in exile is much more than a literary performance; it is a profound political act.


Contents
Acknowledgements
Introduction: Diaspora Consciousness and Literary Expression
Part I: The Fact of Slavery
1. “On the Clifflike Margins of Many Cultures”: Richard Wright’s Travels
2. The Postcolonial as Post-Enlightenment: Michelle Cliff and the Genealogies of History
Part II: From Discrimination and Insult to Homes in Diaspora
3. Harlem on My Mind: Exile and Community in Chester Himes’s Detective Fiction
4.“A Landmark in a Foreign Land”: Simon Njami’s Parisian Scenes
5. History’s Dispersals: Caryl Phillips’s Chorus of the Common Memory
Epilogue
Notes
Works Cited
Index


ABOUT THIS BOOK | TOC