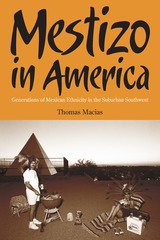 How much does ethnicity matter to Mexican Americans today, when many marry outside their culture and some can’t even stomach menudo? This book addresses that question through a unique blend of quantitative data and firsthand interviews with third-plus-generation Mexican Americans. Latinos are being woven into the fabric of American life, to be sure, but in a way quite distinct from ethnic groups that have come from other parts of the world. By focusing on individuals’ feelings regarding acculturation, work experience, and ethnic identity—and incorporating Mexican-Anglo intermarriage statistics—Thomas Macias compares the successes and hardships of Mexican immigrants with those of previous European arrivals. He describes how continual immigration, the growth of the Latino population, and the Chicano Movement have been important factors in shaping the experience of Mexican Americans, and he argues that Mexican American identity is often not merely an “ethnic option” but a necessary response to stereotyping and interactions with Anglo society.Talking with fifty third-plus generation Mexican Americans from Phoenix and San Jose—representative of the seven million nationally with at least one immigrant grandparent—he shows how people utilize such cultural resources as religion, spoken Spanish, and cross-national encounters to reinforce Mexican ethnicity in their daily lives. He then demonstrates that, although social integration for Mexican Americans shares many elements with that of European Americans, forces related to ethnic concentration, social inequality, and identity politics combine to make ethnicity for Mexican Americans more fixed across generations. Enhancing research already available on first- and second-generation Mexican Americans, Macias’s study also complements research done on other third-plus-generation ethnic groups and provides the empirical data needed to understand the commonalities and differences between them. His work plumbs the changing meaning of mestizaje in the Americas over five centuries and has much to teach us about the long-term assimilation and prospects of Mexican-origin people in the United States.
TABLE OF CONTENTS


ABOUT THIS BOOK | TOC