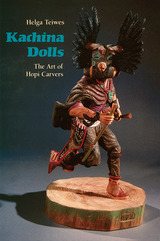 Much has been written about the popular kachina dolls carved by the Hopi Indians of northern Arizona, but little has been revealed about the artistry behind them. Now Helga Teiwes describes the development of this art form from early traditional styles to the action-style kachina dolls made popular in galleries throughout the world, and on to the kachina sculptures that have evolved in the last half of the 1980s.

Teiwes explains the role of the Katsina spirit in Hopi religion and that of the kachina doll—the carved representation of a Katsina—in the ritual and economic life of the Hopis. In tracing the history of the kachina doll in Hopi culture, she shows how these wooden figures have changed since carvers came to be influenced by their marketability among Anglos and how their carving has been characterized by increasingly refined techniques. Unique to this book are Teiwes's description of the most recent trends in kachina doll carving and her profiles of twenty-seven modern carvers, including such nationally known artists as Alvin James Makya and Cecil Calnimptewa. Enhancing the text are more than one hundred photographs, including twenty-five breathtaking color plates that bring to life the latest examples of this popular art form.
AUTHOR BIOGRAPHY
Helga Teiwes is a freelance writer and photographer. Before she retired, her work as a museum photographer included documenting the lives of southwestern Indians, an interest she has pursued privately for more than thirty years.
REVIEWS
"This is not just another book about those cute but expensive dolls sold throughout the Southwest. Teiwes provides good background then proceeds into detail about recent developments in carving technique." —Books of the Southwest

"Teiwes is foremost a photographer, and her images of the artists at work and of the kachina sculptures are extraordinary. . . . Provides an excellent understanding of the secular contexts of contemporary Hopi kachina wood sculpture." —American Indian Culture and Research Journal

"Provides a clear example, easily grasped by most readers, of how Native Americans, even members of tribes rooted in centuries of tradition, adapt to modern technologies and opportunities." —Choice

"This book will be of great value in furthering our understanding of Hopi culture, for stimulating a rethinking of ethnic art, and for opening new horizons in the anthropology of tourism." —Asian Folklore Studies

"This book merits the attention of collectors and others enchanted by these works of art. . . . A pleasure to read." —Utah Historical Quarterly